My days in the Indian National Army by Lakshmi Sahgal 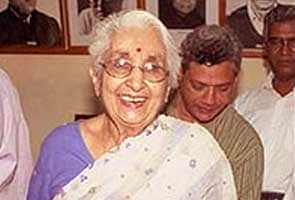 I came from a political family and was interested in the national movement, but I was determined to finish my studies first. I completed studying medicine at the Madras Medical College in 1940. By this time, the Second World War had broken out and there was a move to recruit all doctors into the (British Indian) Army. I did not want to do that and so I went to Singapore where I had close relatives. I started private medical practice there. I had quite a good practice. There were a large number of South Indians in Singapore. I had lots of Chinese and Malay patients as well.

The Japanese forces attacked Singapore on December 8, 1941. Rashbehari Bose, who was a veteran freedom fighter, had come with the Japanese. He started the India Independence League. All Indians were expected to join the League. It was helpful because we got our ration cards, and Indian property was not treated as enemy property, and Indians were not recruited forcibly. I joined the League but could only do welfare work and underground broadcasts.

On February 15, 1942 the Indian National Army (INA) was formed by Captain Mohan Singh. In addition to the INA was the India Independence League which was headed by Rashbehari Bose. Other leaders included Kesava (KPK) Menon who was our political guru and SC Guha. There were military officers in it from the INA. They all went to Tokyo to meet the Japanese government and get assurances from them that the INA would be given the status of an allied army. Unfortunately, the Japanese only verbally agreed to this but never officially ratified them. This led Mohan Singh and Kesava Menon feeling they could not trust the Japanese and Mohan Singh decided to disband the INA. This proposal was not universally popular. Consequently over 80 per cent of the INA officers and men felt that since they had taken oath of allegiance to the INA, they did not want to break it.

In the meantime, news of Subhas Chandra Bose's arrival in Germany had come, and Rashbehari Bose pressurised the Japanese, through their ambassador in Berlin; to have Netaji sent from Berlin to Southeast Asia. The Japanese must apparently have agreed as Bose arrived in July 1943, after first going to Japan where he convinced prime minister Tojo, to declare that Subhas Chandra Bose was not just a leader of India, but a leader of Asia. After he reached Singapore, Rashbehari Bose handed over the leadership of the India Independence League to Subhas Chandra Bose.

Netaji completely reorganised the whole movement and put it on a revolutionary basis. He first gave a call for total mobilisation of manpower and appealed to all able-bodied youth to volunteer for the INA. The response was very good with the strength of the INA doubling within six weeks from 30,000 to 60,000. The volunteers came from Singapore, Burma, Malaysia, Indonesia, Hongkong and Thailand.

At the second mass meeting, Netaji dropped a bombshell by saying that it was his intention to form a women's infantry regiment, named after the Rani of Jhansi who had fought so heroically against the British in 1857. I already knew of this idea as he had told me earlier during an interview I had sought with him. I told him I was ready to join, and from the next day he gave me a room in his headquarters, and I started recruiting women. The date was July 8, 1943.

I told him I was not very hopeful of getting recruits as most of the educated middle class families had gone back to India, and those who were left were the families of workers in the rubber estates, PWD workers and a very small middle class. He answered me 'Don't depend on the middle class in a revolutionary movement. It is the workers and kisans who form the backbone of any revolutionary movement.' He proved to be right as without much difficulty we were able to raise a regiment of 1500 women, trained as soldiers, and 200 as nursing staff. One group who proved to be remarkable in their enthusiasm and efficiency, were the young women from families settled in those areas for two to three generations. They had little contact with India except for cultural associations.

Training was started for the Rani of Jhansi Regiment in Singapore and Rangoon from October 23, 1943. Two days earlier, on October 21, Netaji had formed the Provisional Government of Azad Hind and, to show his sincerity towards the cause of emancipation of Indian women, he appointed me as a minister in his government. I was given the portfolio of Women's Problems and Rani of Jhasnsi Regiment.

Our training lasted three months. It was very rigorous. We all had to wear a khaki uniform of pants and bush shirt, and cut our hair short. I had hair below my knees which my mother had never allowed me to cut. So I was really glad to have it cut and never grew it back since.

Regulars from the Indian Army trained the recruits, emphasising on discipline and efficiency. Those instructors took a great interest and a pride in their work. When we responded to their training, they were very happy and felt proud. The only weapons we had were rifles and hand grenades; no automatic weapons. Apart from physical training, there were classes in military tactics, strategy, map reading. There were also Hindi classes for one and half hours every day, with the language taught in the Roman script. Though the recruits were mostly South Indians, within three months they had all learnt Hindi.

We also had political classes, and quite often Netaji himself took these classes.
After three months training, the first batch of the Rani of Jhansi Regiment moved from Singapore to Burma, and in May, 1944, small batches of the regiment moved from Rangoon on the way to Imphal. Moving into action, the regiment took part mostly in guerilla attacks. The behaviour of the men was exemplary, and there was not a single untoward incident. In fact, they would protect us from the Japanese and local population.

The Japanese soldiers proved to be the biggest male chauvinists. They initially objected to the women's regiment and did not give us land or camp sites. But when they saw us functioning, were sufficiently impressed to change their minds. However, our regiment was able to proceed only upto the middle of Burma as the attack on Imphal by the INA, supported by the Japanese Army, was repulsed by the heavily reinforced British garrison. After suffering heavy casualties, it had to withdraw. In addition, the monsoon set in earlier than usual, making movement practically impossible. The order for withdrawal was reluctantly given by Netaji and the ill- equipped and undernourished INA retreated to central Burma where they regrouped and attacked the British Army, delaying their advance.

The Rani of Jhansi Regiment however, was disbanded and those who had families in Burma were safely sent back. Netaji himself escorted the Malayan contingent to Thailand, and then to Malaysia. In this connection I would like to mention that, without exception, all the members of the Rani of Jhansi Regiment sent a petition to Netaji, signed in their blood, saying that they were willing to die in the battlefield and did not want to retreat.

At this stage, I volunteered to work in an INA hospital which had been set up for the severely wounded and incapacitated INA personnel. Although the hospital was situated in the thick jungles of the Shan states which had never experienced any fighting or aerial bombardment. The spies of the Allied forces proved nevertheless to be everywhere and this was forcibly brought home to us when, before rearing. Burma, Netaji decided to visit the hospital. The very next day we were heavily bombed. The hospital destroyed and most of the patients killed. We tried to evacuate the few survivors in bullock carts, but were caught on the road to Rangoon by the advancing British forces in the beginning of June 1945.

I was separated from the other INA personnel and sent to Rangoon for interrogation, and kept under house arrest. In March 1946 I was released and taken to India.


Back in India, the INA trials attracted massive public attention. Nehru put on his lawyer's robes to defend the INA prisoners, but it was Bhulabhai Desai who made the biggest contribution, his defence speech at the INA trial went down as the historic speech of the trial.

Promoted
Listen to the latest songs, only on JioSaavn.com
After independence I returned to my medical practice. I decided not to join any party. Not wanting to have anything to do with the Congress party, unable join the then undivided CPI because of their attitude to us.

In 1969, my daughter, Subhasini, returned from America and joined the CPI (M) through the trade union movement in Kanpur. In 1971, during the Bangladesh War, I wanted to volunteer my service in relief work, and wrote to Padmaja Naidu, who was then the Governor of West Bengal. However, she could not help me. Then I saw Jyoti Basu's appeal in People's Democracy for support for the People's Relief Committee. I volunteered and worked in the border areas for about six weeks. It so happened that when returning through Calcutta, the Polit Bureau of the CPI (M) was meeting and I decided to go and meet the leaders. It was then I decided to join the Party, and have remained with it ever since.