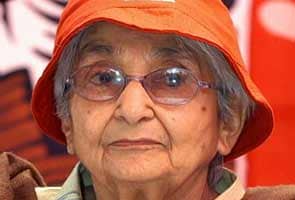 Mr Ansari described Mrs Sahgal as a noted freedom fighter and tireless campaigner for women's rights and social causes. He said he was deeply grieved by her demise.

In his condolence message, the Prime Minister said, "In the passing away of Shrimati Lakshmi Sahgal the nation has lost an icon of liberal values and selfless service".

Mr Ansari said, "Captain Lakshmi Sahgal represents the pinnacle of sacrifice and struggle for the country, and for the rights of the downtrodden and women. Her contribution in public life in politics, the trade union movement and the women's movement are remembered by one and all".

He said that Mrs Sahgal's compassion, concern and commitment towards humanity manifested in all her efforts and activities and this has inspired many to emulate her.

Promoted
Listen to the latest songs, only on JioSaavn.com
"Her demise is a tremendous loss to the nation," he said. 97-year-old Lakshmi Sahgal, who was a part of Netaji Subhash Chandra Bose's Indian National Army, died in Kanpur today.