With the onset of monsoon in various districts of the Konkan Kinarpatti (coastal strip), the India Meteorological Department (IMD) issued a red alert for Mumbai on Wednesday, and a yellow alert for the next 4 days. "The Konkan Kinarpatti including Mumbai may receive heavy to very heavy rainfall for next 4 days," Shubhangi Bhute, sscientist, IMD Mumbai said.

The southwest monsoon arrived in Mumbai on Wednesday, the IMD announced as heavy rains lashed the country's financial capital and suburbs since early morning.

Water-logging was reported in some low-lying areas, while local train services - the lifeblood of the city - have been largely unaffected so far, although services from the Chhatrapati Shivaji Maharaj Terminus (CSMT) to Kurla have been suspended since 9.50 am due to waterlogging and heavy rainfall and waterlogging between Sion and Kurla.

The routes of some BEST buses - the city's public transport provider - have also been diverted.

A high tide of over four metres is expected around noon in the Arabian Sea, the Brihanmumbai Municipal Corporation (BMC) said.

Several parts of the city and suburbs witnessed heavy rainfall along with thunder in the morning.

Here are the highlights on Mumbai Rain:

Jun 09, 2021 22:57 (IST)
Mumbai Airport aborts 4 landings due to inclement weather
The Chhatrapati Shivaji Maharaj International Airport, Mumbai witnessed a total of 4 aborted landings on Wednesday due to heavy rainfall in the city.
"Due to the inclement weather in the city earlier today, Chhatrapati Shivaji Maharaj International Airport witnessed a total of 4 go-arounds. Operations at the airport continue as per schedule," Mumbai Airport Authorities said.
Mumbai local train services were also suspended between some stations as a precautionary measure after severe waterlogging.
Shivaji M Sutar, Chief Public Relations Officer, Central Railway, Mumbai said that train services between Kurla and CSMT were suspended as the water was flowing over tracks between Kurla and Sion stations.
"Due to heavy rains in Suburbs and waterlogging b/w Sion- Kurla, as precautionary measures, the train services between CSMT-Kurla have been suspended from 9.50 am. Services on other sections are running," Shivaji M Sutar tweeted.
Jun 09, 2021 20:44 (IST)
Mumbai Rainfall: Train services resume in some parts
Train services on slow corridor b/w CSMT- Kalyan/Karjat/ Kasara and CSMT- Bandra / Goregaon have resumed.
Jun 09, 2021 19:42 (IST)
Mumbai rains: Commuters face problem in city due to rains

"The railway tracks are waterlogged, I have been waiting at Matunga Station for the past one hour," says a commuter pic.twitter.com/hHyqQEigyn

IMD issued Red alert in Mumbai for today & orange* alert for the next 4 days. pic.twitter.com/uU0xYEBFfb

Jun 09, 2021 17:06 (IST)
A cyclonic circulation lies over Eastcentral and adjoining Northeast Bay of Bengal between 4.5 and 5.8 km above mean sea level. Under its influence, a Low Pressure Area is likely to form over North Bay of Bengal an neighbourhood around 11th June, 2021. it is likely to more marked during subsequent 24 hours.
Under its influence; fairly widespread to widespread rainfall activity with isolated to scattered heavy to very heavy falls very likely over most parts of East India and adjoining Central India from 10th June onwards. Isolated extremely heavy falls also very likely over Odisha on 11th and 12th; over Chhattisgarh 11th-13th; over Vidarbha 12th and 13th, June 2021.
Jun 09, 2021 16:23 (IST)
Southwest Monsoon has further advanced into entire central and some parts of north Arabian Sea: Weather office
Southwest Monsoon has further advanced into entire central and some parts of north Arabian Sea, entire Konkan including Mumbai and most parts of interior Maharashtra, some parts of south Gujarat region, some more parts of Telangana and Andhra Pradesh, most parts of central Bay of Bengal and some more parts of North Bay of Bengal today.
Southwest Monsoon is likely to advance into remaining parts of Arabian Sea and Maharashtra, some more parts of Gujarat, remaining parts of Telangana, Andhra Pradesh, some parts of Madhya Pradesh and East Uttar Pradesh, entire Odisha, West Bengal, Jharkhand, Chhattisgarh and Bihar during next 2-3 days.
Jun 09, 2021 16:11 (IST)

Jun 09, 2021 15:05 (IST)
Heavy Rain In Mumbai; 4 Subways Shut Due To Inundation
The first rain of this year's monsoon season in Mumbai on Wednesday caused water-logging in various parts of the city, prompting the traffic police to shut four subways and forcing motorists to abandon their vehicles on roads. The city police appealed to Mumbaikars not to step out of their homes unnecessarily and cautioned them against travelling to some of the inundated areas.
Jun 09, 2021 14:53 (IST)
Heavy Rains Disrupt Normal Life In Mumbai
Normal life was disrupted due to severe waterlogging after heavy rains lashed Mumbai and other parts of Maharashtra on Wednesday with the advance of the monsoon in the state. Mumbai local train services were suspended between some stations as a precautionary measure.
Jun 09, 2021 14:47 (IST)
Pics: Monsoon Arrives In Mumbai, Heavy Rain, Waterlogging In Several Areas
The weather office on Wednesday announced the arrival of the south-west monsoon in Mumbai. Several places in Mumbai received heavy rain, leaving many low-lying areas flooded. A high tide of over four metres is expected around noon in the Arabian Sea, the Brihanmumbai Municipal Corporation (BMC) said. See Pics
Jun 09, 2021 12:56 (IST)

Local train services from Kurla to CSMT (UP, @central_railway and Harbour) has been suspended due to heavy rains and waterlogging in certain areas.#MyBMCUpdates

#WATCH | Maharashtra: Andheri Subway in Mumbai, closed due to severe waterlogging. Several parts of the city are witnessing waterlogging today due to heavy rainfall. #Monsoonpic.twitter.com/heb4iFJRxd

Jun 09, 2021 11:42 (IST)
Heavy Rain, Waterlogging In Mumbai As Monsoon Advances In Maharashtra
The southwest monsoon reached Mumbai and parts of Maharashtra early Wednesday morning - a day ahead of schedule - with heavy rainfall over the state capital and nearby suburban areas leading to flooded roads and subways, and some disruption in traffic and local train services. Read Here
Jun 09, 2021 11:34 (IST) 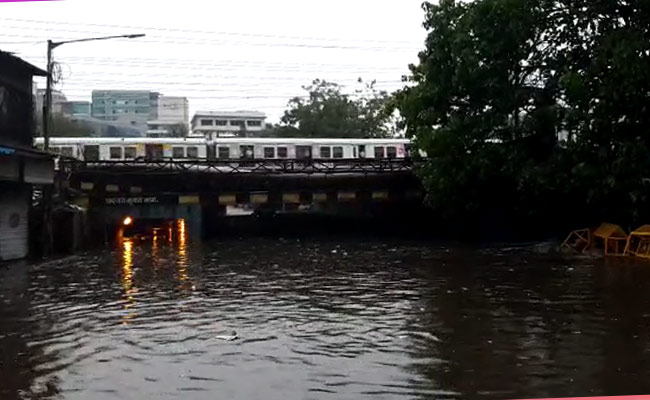 The following #BEST routed have been diverted due to waterlogging in certain areas:
501,502,504,505 via Mankhurd bridge

#WATCH | Maharashtra: Severe waterlogging at Kings Circle in Mumbai, due to heavy rainfall. #Monsoon has arrived in Mumbai today. pic.twitter.com/PI2ySwhBCR

Mumbai Local train services b/w Kurla & CSMT have been halted, as a precautionary measure; services to resume as soon as the water recedes.#Monsoonpic.twitter.com/YUaETnmv7z