Mumbai Flower Seller, 28, Gets Admission In Top US University For PhD

Sarita Mali is currently doing her PhD in Hindi Literature at Indian Language Centre at JNU. She has taken degrees of MA and Mphil from JNU and in July, she will submit her PhD. 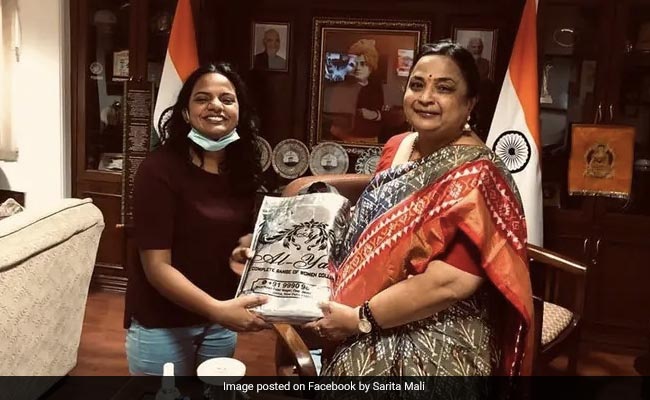 Sarita Mali is one of the youngest scholars at JNU.

Sarita Mali, 28, who used to accompany her father in selling flower garlands on the streets of Mumbai, is now getting admission to the University of California for a PhD.

She is currently doing her PhD in Hindi Literature at Indian Language Centre at JNU. She has taken degrees of MA and Mphil from JNU and in July, she will submit her PhD.

She further said, "I feel there are ups and downs in everyone's life. Everyone has his/her stories and sufferings. This is decided in which society one is born and what life you get. Unfortunately or fortunately in some sense, I was born in a society where problems were the most essential part of my life."

During festivals, she used to sell flowers with her father, especially at big festivals like Ganesh Chaturthi, Diwali, and Dussehra. She has done this work with her father during school time. Otherwise, whenever she used to go on vacations from JNU, she used to make flower garlands. For the past two years, as the pandemic hit, her father's work halted. Before that, they all used to do this work. This work has been part of their lives. Since she opened her eyes, she has seen only flowers. So, this was her society where on one side, there were struggles and on the other side, there was hope. There were problems and there was a passion to do hard work as well. The same passion and support of her family have brought her here, she added.

Sarita Mali has 6 members in her family including her mother, father, elder sister and two younger brothers. The sole bread earner is her father. Due to lockdown, her father went to his hometown in Badlapur in Jaunpur.

In 2010, one of her cousins mentioned to her about JNU and many things were unknown to her. In 2010, the internet was not an era and she even didn't have a Smartphone till graduation. So suddenly they said, 'whosoever goes to JNU becomes something'. That particular line got stuck somewhere in her mind. She used to chant that daily like a mantra. She started her preparation for JNU in her BA first year. Back then, the exams for JNU used to be subjective and in 2014, she got selected for the last seat of OBC in JNU for her master's, she said.

She further said that she learnt a lot from her day-to-day struggles.

"Sometimes it feels unbelievable that I am living in some dreams, but I feel there are more responsibilities for me now. When I turn back to look at that society from where I have come, that journey I can't believe it. If JNU would've not been here, I would not have done what I am doing right now. Trust was made after coming to JNU that we can achieve many things," she said.

She appealed to the government to make more such public-funded universities so that more students from their society can come and study, she said.

Sarita Mali is one of the youngest scholars at JNU.

"I used to face mixed reactions from people around me. Some people get inspired by me, some used to think that my father is doing such a small job and I am studying at JNU, and some used to raise questions asking what kind of study I am doing for so many years. I am one of the youngest research scholars at JNU. I was 22-year-old when I got admitted here in Mphil," she further said.