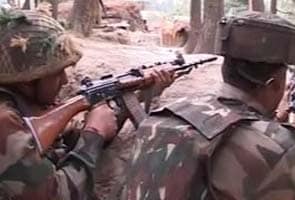 New Delhi: After the initial euphoria, the reality check.

At a cost of 64,000 crores, the government has cleared the creation of a Mountain Strike Corps specifically aimed at launching offensive operations against China - if need be.

40,000 additional soldiers will be deployed along the border with China.

The proposal was cleared on Wednesday by the Cabinet Committee on Security, headed by the Prime Minister.

But this is just the first step in what is needed urgently - the addition of 40,000 new troops to the Indian Army, the world's 3rd largest, with 1.3 million soldiers.

The budget of Rs 64,000 crore for the new corps is to be spent over seven years - which is just as well since raising new formations as large as a Corps is not an easy task. It is further difficult to make that formation capable of mountain warfare. For mountains gobble up troops; they take a heavy toll on man and machine. Living at altitudes upwards of 12,000 feet and going upto 22,000 feet requires extreme fitness levels. The Himalayas - along which the entire 4,000 km China frontier is spread out - is an unforgiving terrain.

So green-lighting a budget, however large, is in some ways, the easiest part.

What will be crucial for the new corps is cooperation and coordination between a muscular omnibus of stake-holders: The Defence, Finance and Environment Ministries, as well as the Army, Air Force and Border Roads Organisation.

In the recent past, objections from the Environment Ministry have impeded upon the construction of crucial roads in Arunachal Pradesh, Sikkim, Himachal Pradesh, Ladakh and Uttarakhand. In the last case, the lack of connectivity was driven home brutally when torrential rains ripped open the state last month, leaving thousands stranded.

It is nobody's case that the environment should not be protected but a balance needs to struck in caring for the environment and national security imperatives. The state governments will need to back the plan by facilitating the speedy allotment of land in remote areas.

The climate in most of these states means that the Border Roads Organisation can leverage, at best, a four-month season to deliver new routes.

Finding the right contractors with the right skills and willingness to work on isolated, remote areas is another big challenge. The Indian Air Force, for instance, has been trying for three years to sign contracts that will lead the upgrading seven Advanced Landing Grounds or ALGS, crucial for the ability to quickly airlift troops to strategic parts along the China border. But the deals have not been closed because expert contractors find it difficult to work in these areas.

The new mountain corps will require light artillery which can be easily transported, even airlifted in the highest mountains. Given India's painfully-slow process of weapons acquisition, empowering the Mountain Strike Corps quickly will be a big challenge.

Given these difficulties, Beijing will not be unduly bothered although it will certainly make the mandatory noises may be by describing the Indian decision as provocative.

Promoted
Listen to the latest songs, only on JioSaavn.com
It is all the more necessary for the government to walk the talk in making the new formation a reality by adhering to timelines.