Monsoon 2020 updates: Several districts in West Bengal are likely to get heavy rainfall for the next few days, the Met office said. 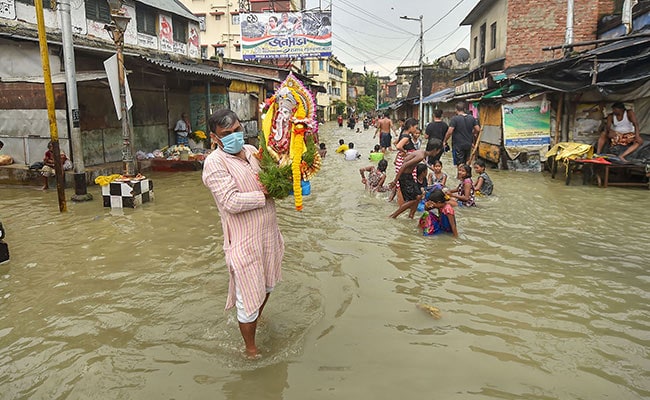 A man in Kolkata, takes his Ganesh idol for immersion through a flooded street on Sunday

The districts of East and West Midnapore, South 24 Parganas, Jhargram, Howrah, Hooghly, Bankura and Birbhum are likely to receive heavy rainfall, while thunderstorm is likely in other places of West Bengal from Monday, the Met office said.

Intensity of rain is likely to increase in the coastal districts from Tuesday with the low pressure system becoming more marked, and it may continue till Friday morning. Fishermen have been advised not to venture into the sea till Thursday.

With several rivers in the region already in spate owing to heavy downpour over the last week, people living in the coastal districts are apprehensive of flooding of agricultural fields and low-lying areas.

The state Irrigation Department has said that it is keeping watch on the situation. Heavy rain occurred in Birbhum district, while other parts of West Bengal also received rainfall since Sunday morning, the Met department said.

Some low-lying areas in the coastal districts of South 24 Parganas and East Midnapore have been inundated owing to overflowing of some rivers, district officials said.