Nawazuddin Siddiqui, who co-stars with Sridevi in MOM says, "I was always her fan. Big fan. Srideviji has always been my favourite actress" 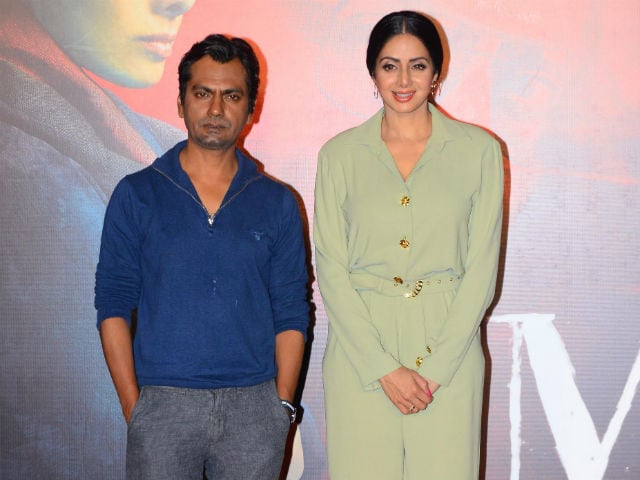 New Delhi: Sridevi is all set to present her next film MOM next month. It is the actresses' first Hindi release in five years after Gauri Shinde's English Vinglish. In MOM, Sridevi, co-stars with Nawazuddin Siddiqui and Akshaye Khanna. Nawazuddin, who is the worked in films such as Bajrangi Bhaijaan, Badlapur and Manjhi: The Mountain Man, says that he's a 'big fan of the actress.' "I was always her fan. Big fan. Srideviji has always been my favourite actress. When I got a chance to work with Srideviji in MOM, I couldn't believe it. It was more than a dream come true. As an actor, I couldn't hope for a more favourable situation. It's my good fortune that I got to share screen space with her," Nawazuddin told news agency IANS.

Sridevi plays a mother to two daughters in the film. The plot of the story revolves around Sridevi and Pakistani actress Sajal Ali, who plays her elder daughter, but isn't her actual daughter. Devki (Sridevi) struggles hard to pacify her relationship with Arya (Sajal) until an untoward incident hits the family. Sajal is in trouble and Devki takes revenge for her daughter. Nawazuddin Siddiqui looks totally unrecognisable in the film. Akshaye also has pivotal role to play.


"As a viewer I would always wonder how she managed to be so perfect in every film, every character. As a co-actor, I still don't know how she manages to be so flawless in every take. We tend to use superlatives to describe many artistes whom we like. And we often say about an actor or actress that he or she is one of the best. But with Sridevi, I can say with full confidence and certainty that she is the best actor in the world. No two ways about it," Nawazuddin told IANS.

Meanwhile, Sridevi, who has been working in the industry for more than four decades recently told NDTV that she still feels like a newcomer. MOM is the 53-year-old actresses' 300th film.

Promoted
Listen to the latest songs, only on JioSaavn.com
MOM, director by Ravi Udyawar and produced by Boney Kapoor, releases on July 7.