The West Bengal BJP has called the hoarding, put up near the chief minister's Kalighat home, audacious. 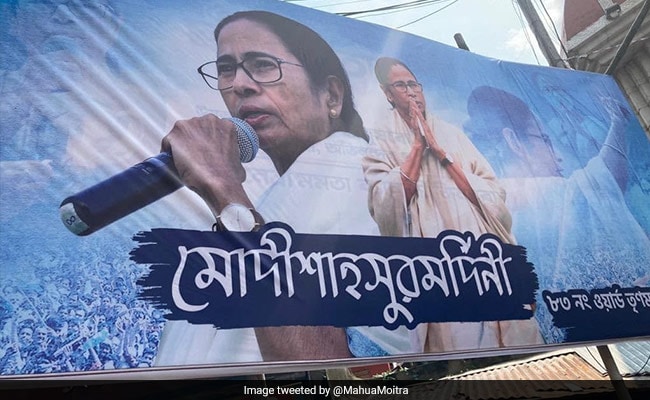 The hoarding reflects the "audacity, taste and culture of the Trinamool Congress", BJP said

As the countdown begins for the Durga Puja festival, Trinamool Congress supporters have put up a hoarding in Kolkata of Chief Minister Mamata Banerjee with a caption that reads ''ModiShahsurmardini'' - a wordplay on ''Mahisasuramardini'' (demon slayer), an apparent dig at PM Modi and Amit Shah.

The West Bengal BJP has called the hoarding, put up near the chief minister's Kalighat home, audacious.

The TMC said it was done by some "overenthusiastic" supporters and not by the party, after the TMC chief's resounding victory in the Bhabanipur by-election. But, the bottom-right corner of the hoarding read "Ward no. 83 Trinamool Mahila Congress", indicating that the party's women's wing has put up the massive banner projecting Mamata Banerjee as the leader who can defeat PM Modi and Amit Shah.

While brevity is the soul of the hoarding's political message, a Facebook group supporting Mamata Banerjee has taken it further. "ModiShahsurmordini - Ebar lokkho #ModiMukta #Varot (Now the goal is a Modi-free India)", the post reads.

"Though the party did not put up the hoarding, it reflected the anger of people against the hike in fuel prices, closure of PSUs and job losses. People are also not happy with the divisive campaign of the BJP heavyweights during the election and the killing of farmers in BJP-ruled states," TMC spokesperson Kunal Ghosh said.

The image of the hoarding shared on Twitter and Facebook evoked mixed response from social media users.

While one person posted ''shame'', another said, the word "Modishahsurmardini" did not specify individuals but the ruling dispensation at the Centre.