"PM Hurt By Tweet, Not 135 Deaths": Trinamool Leader Who Was Arrested Twice

"BJP is hilariously mistaken if they thought this would break me. I'm only going to come at them harder," he said, taking on the ruling party. 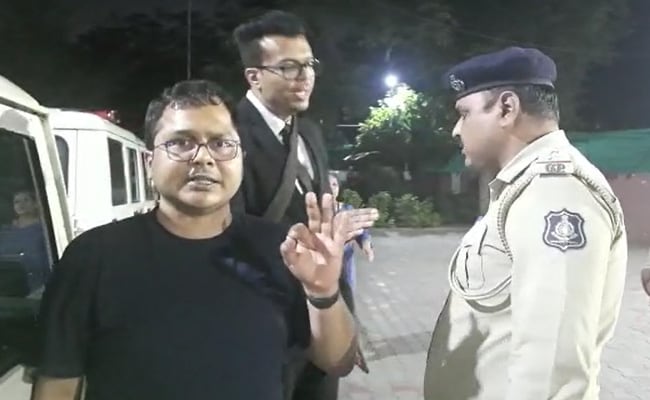 Mr Gokhale managed to get bail once again after he was re-arrested after his bail in the first case.

Trinamool Congress spokesperson Saket Gokhale, who was arrested twice in three days over an alleged "fake tweet" against Prime Minister Narendra Modi, today claimed that he was arrested on orders from the Bharatiya Janata Party. He directly targeted the PM as well, saying he was "hurt" by a tweet but not the deaths in the accident.

"Modi is hurt by a tweet. Not by deaths of 135 innocent people," he said in a tweet today.

Ironically I was arrested twice in 3 days for a tweet about Morbi bridge collapse.

And till date, the owners of Oreva company who built the faulty bridge haven't even been named in an FIR let alone arrested.

Modi is hurt by a tweet. Not by deaths of 135 innocent people.

"I was arrested on orders of BJP, got bail, re-arrested, & got bail again - all in a span of 4 days. I'm grateful to the Hon'ble judiciary for upholding my liberty," he added.

Mr Gokhale managed to get bail once again after he was re-arrested after his bail in the first case.

Calling the Election Commission as "BJP ally," he said the second complaint against him was filed by the poll body.

On Thursday, hours after he secured bail from a metropolitan court, Gujarat police re-arrested Mr Gokhale in a case related to his tweet about the bridge collapse in the state's Morbi town.

"BJP is hilariously mistaken if they thought this would break me. I'm only going to come at them harder," he added, taking on the ruling party.

Saket Gokhale said he was given no notice for five days after an FIR was filed against him in Ahmedabad. "The police told me that the IB (Intelligence Bureau) was tracking me & told CISF (Central Industrial Security Force) to intercept me at Jaipur airport," he said.

Ahmedabad Police who were in Delhi for a different case were told to rush to Jaipur to arrest me, he claimed.

Referring to the tweet that got him in trouble, he asserted a "frivolous case" was filed for sharing a tweet "made by someone else".

"Funnily the police have no clue who that person is," he added.

Mr Gokhale brought up the issue of the Morbi bridge collapse again, saying the owners of Oreva company who built the faulty bridge haven't even been named in an FIR, let alone arrested.

"The aim was to find a way to target me, throw me into jail, and keep me there. This is the Modi & Shah textbook perfected in UP & Gujarat," he said.

"Surprisingly, the case for "electoral interference" was filed after polling for both phases was over. EC, however, is ok with communal speeches & roadshows by Modi on poll day," he added, referring to communally coloured speeches by Assam Chief Minister Himanta Biswa Sarma, actor and BJP MP Paresh Rawal, and the PM's elaborate public entry to the polling booth which opposition parties termed an illegal roadshow.