Union Minister of Minority Affairs Mukhtar Abbas Naqvi said Ms Mufti with her statement was "trying to give oxygen to terrorists". 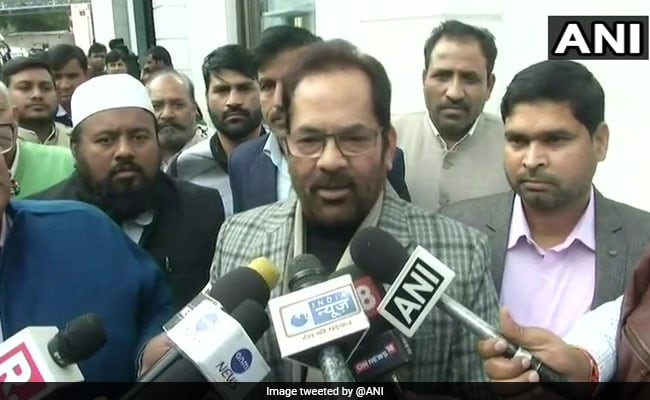 "Knowing or unknowingly she has only exposed her proximity to separatists," Mukhtar Abbas Naqvi said.

Former Jammu and Kashmir Chief Minister Mehbooba Mufti has exposed her proximity with separatists by warning that if her Peoples Democratic Party (PDP) was split it would create more terrorists in the state.

Union Minister of Minority Affairs Mukhtar Abbas Naqvi said Ms Mufti with her statement was "trying to give oxygen to terrorists".

"Knowing or unknowingly she has only exposed her proximity to separatists," the BJP leader said.

At a press conference in Srinagar, the PDP chief said if the central government split her party to form new government in the state, it would create more Salahuddins and Yasin Maliks -- who were first to take arms after the 1987 elections were allegedly rigged.

Salahuddin, whose real name in Yousuf Shah, contested the election and Malik was his polling agent. However, it was alleged that the polls were rigged in favour of the National Conference-Congress coalition. Shah ended up heading the Hizbul Mujahideen and Malik launched Jammu and Kashmir Liberation Front

Mehbooba Mufti, he said, "seems under tremendous pressure from her own party.

"Is she now equating her party with Hizbul Mujahiddin," he asked.

Former Jammu and Kashmir Deputy Chief Minister and senior state BJP leader Kavinder Gupta said: "It is very unfortunate that she (Mufti) was ruling the state only a few days back as Chief Minister and now she threatens of a terror uprising."