Boats, Cranes To Search For 13 Trapped In "Rat Hole" Mine In Meghalaya

Meghalaya mine: Over 100 rescue personnel are involved in the search and rescue operations.

Two days after 13 people were trapped in an illegal "rat hole" coal mine in a remote part of Meghalaya, massive search and rescue operations are on. Over 100 personnel have been pressed into action since Friday morning to rescue the people from the 320-feet deep mine.

Dozens of emergency workers were pumping water out of a large trench that was flooded early Thursday near a nearby river in East Jaintia Hills district in the mineral-rich state. The water inside the mine is around 70 feet deep, official sources said. 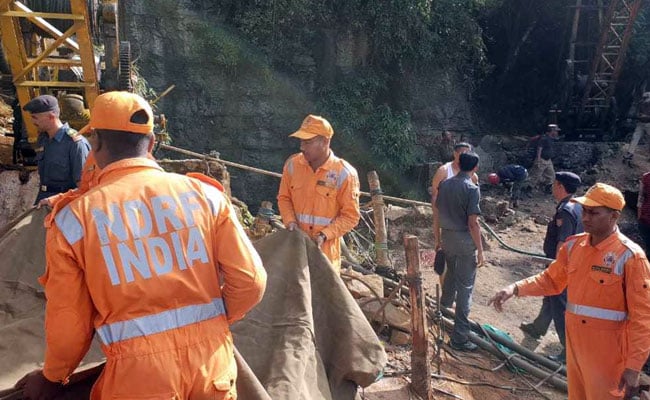 Environmentalists have been fighting the age-old practice of "rat-hole" mining in Meghalaya.

NDRF rescuers and divers searched inside the flooded coal mine and all accessible areas with the help of boats. Poor visibility inside the mine due to muddy water and coal dust remains a big challenge for the rescuers. No map or plan of the mine - divided into chambers - is available, making it tougher to locate the trapped people.

The police in East Jaintia Hills, who got to know about the missing miners on Thursday morning, said the mine appears to be an old, abandoned one where illegal mining had resumed about a week ago. "Rat hole" mines are common in Meghalaya as they are dug by locals but are very dangerous as the coal is pulled out from narrow, horizontal seams.

"The focus is on the rescue operations in the area. We are concerned about them.The NDRF and the police are leading the operation. We admit that illegal mining was going on. We will take action. This is not acceptable," Meghalaya Chief Minister Conrad Sangma told NDTV.

A complaint has been registered against the owner of the mine who is missing.

Three of the trapped miners inside are from Lumthari in Meghalaya. The remaining 10 are from West Garo Hills and neighbouring Assam.

The National Green Tribunal had banned coal mining in Meghalaya in 2014 after environmental activists complained it was responsible for severe water pollution.

At least 15 miners were killed after they were trapped inside a flooded rat-hole mine elsewhere in Meghalaya in 2012. Their bodies were never recovered.