"India Stands For Vasudhaiva Kutumbakam": Minister To Indians In US

Meenakashi Lekhi said members of the Indian diaspora are innovators, engineers and have "contributed to the well-being of your adopted nation". 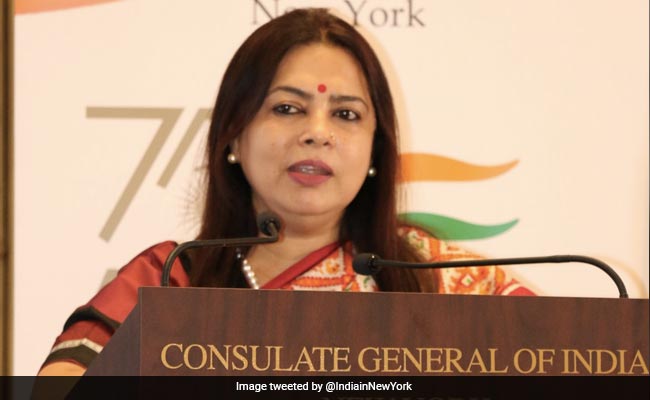 Meenakshi Lekhi is in New York on an official visit.

India stands for friendship, goodwill and cooperation, Minister of State for External Affairs Meenakashi Lekhi has said, stressing that the country believes in working for the well-being of mankind and not causing disruption.

Ms Lekhi, who is in New York on an official visit, addressed members of the Indian-American community at a community reception hosted at the Consulate General of India in New York on Wednesday.

In her address, she said members of the Indians are innovators, engineers and have "contributed to the well-being of your adopted nation".

"That is the positivity of India which Indians bring together. The fact is that we tend to assimilate ourselves in the societies we live in. We believe in working for the well being of mankind and not cause disruption, which several other people do. India is for peaceful purposes, India is for the progress of mankind, India stands truly for Vasudhaiva Kutumbakam and that message is carried on by all of you," she said.

"While India is innovating, India is trying to help the world and help itself and that is what "Atmanirbharta'' and self-sustenance is all about," she said.

The world is awakening to the threats of many kinds and India has emphasised that "peaceful use of science and technology, rather than weaponisation is the way forward," she said.

She voiced gratitude for the efforts of the Indian community, who she said are the "ambassadors of India", who through their achievements and contributions have brought "a good name to Mother India. We are very, very proud and grateful to all that you stand for."

As India marks 75 years of its independence, Lekhi referred to Prime Minister Narendra Modi''s address to the nation from the ramparts of the Red Fort in which he had said that India has to march ahead with new pledges for the next 25 years and that "we have to ensure we meet our goal of building Aatmanirbhar Bharat when we celebrate 100 years of India''s Independence."

Ms Lekhi also expressed gratitude to all the scientists and innovators who were on the frontlines of combating the COVID-19 pandemic.

"I cannot thank you enough that when the world was battling pandemic and COVID-19, how the entire community across the globe stood together," she said.

She added that from "Vaccine Maitri" to bringing Indians home from other countries to producing vaccines, "we have shown the world what India stands for."