The agency had said that investigation revealed the role of Aftab Ansari as the main accused in smuggling of these arms and ammunition. 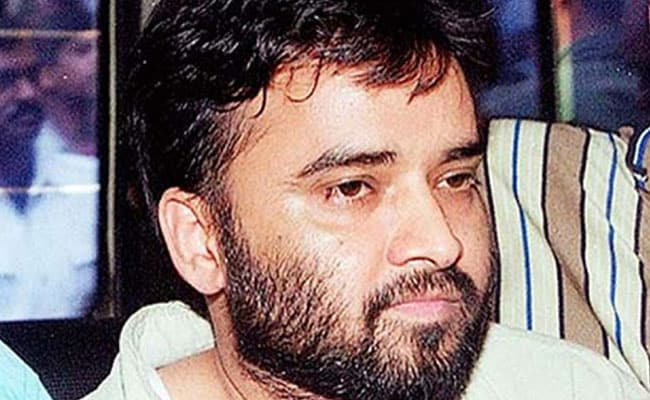 Aftab Ansari was brought from Dubai through deportation by the CBI in 2002. (File)

A special CBI court in Ahmedabad today sentenced Aftab Ansari, the mastermind of the American Center attack in Kolkata, to 10 years' rigorous imprisonment in a 17-year-old arms and ammunition smuggling case.

This case, among a number of cases registered against Aftab Ansari, pertains to the recovery of a huge cache of weapons and explosives from a truck on the intervening night of October 26-27, 2001 from Patan in Gujarat.

"During investigation, four more persons were arrested. They have already been convicted," a CBI spokesperson said today in Delhi.

Aftab Ansari was brought from Dubai through deportation by the CBI in 2002.

The CBI had claimed that Aftab Ansari had admitted to having links with terrorists in Pakistan especially with Omar Sheikh, one of the three terrorists released by India to end the 1999 hijacking of an Indian Airlines plane IC-814 in Kandhar.

The agency had said that investigation revealed the role of Aftab Ansari as the main accused in smuggling of these arms and ammunition.

"After a thorough investigation, a charge sheet was filed in the designated court. The trial court found the accused guilty and convicted him," he said.

It was alleged that Aftab Ansari had used the services of hawala operators in sending money to his henchman Aqib, who in turn would pay gunrunners who brought arms consignment into the country from Pakistan.

Aftab Ansari has allegedly used the services of hawala operators in forwarding Rs 25 lakh cash to Aqib so that he could pay the money to the persons who brought the consignment.

Aquib had stated during interrogation that he was instructed to transport the arms and explosives in a truck from the border, the agency had claimed.

"The deal was being carried out under the instructions and supervision of Aftab Ansari. The instructions were received on telephone as well as on e-mail in the name of Abdal who is none other than Aftab Ansari," the CBI had said.

Aftab Ansari has been convicted in the American Center attack case and serving life sentence in a prison in Kolkata.

Five persons including four police constables were killed and 20 were left injured when two motorbike-borne killers carried out a shooting attack on the American Centre security staff on January 22, 2002.