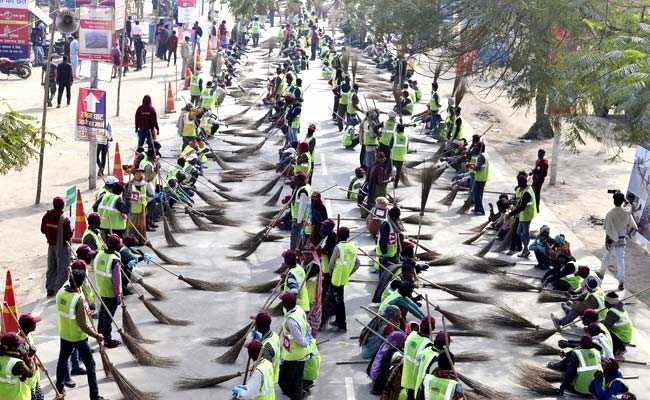 The new record was created in line with the vision of Swachh Bharat Abhiyan. (PTI)

With a massive cleanliness drive, a new Guinness world record has been created at the Kumbh Mela, the Prayagraj Mela Authority said today. Two more records were broken--one for "most contribution to a handprint painting in 8 hours" and the other for "the largest parade of buses".

The new record was created in line with the vision of Swachh Bharat Abhiyan, a nation-wide campaign aimed at cleaning up cities, towns, and villages alike.

Only yesterday, the Prayagraj Mela Authority had set a Guinness World Record for the handprint painting. Over 7,664 people had participating in creating the painting. The painting at Kumbh, overtook a similar one in Seoul, North Korea, to which 4,675 people had contributed.

With a fleet of 500, Kumbh authorities had set the Guinness World Record for the largest parade of buses. The buses bearing the Kumbh logo covered about 3 kilometers.