Six plastic chairs, rugs and mats on the floor and a "home-made" pain relief oil from Punjab are being used to help the visibly-tired protestors unwind and reduce their muscle tension. 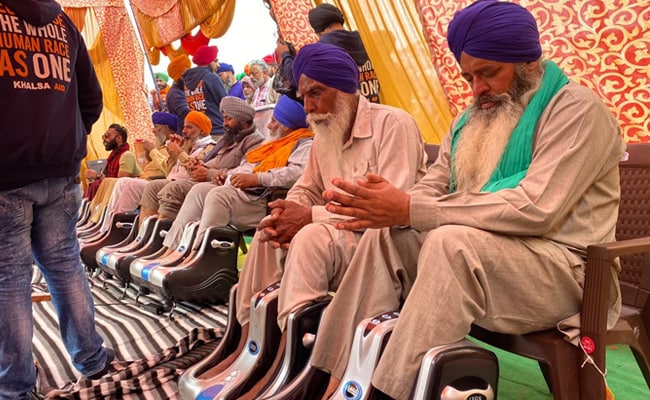 The growing complaints of sore feet, stiff back or pain around the kneecap among the protesting farmers -- especially the older ones -- have led to opening of a makeshift massage centre at Singhu Border.

Six plastic chairs, rugs and mats on the floor and a "home-made" pain relief oil from Punjab are being used to help the visibly-tired protestors unwind and reduce their muscle tension.

They have been camping at the border for over 70 days now in protest against the three contentious agri-laws, with no immediate end in sight for the agitation.

Harpreet Singh, who already has his hands full with multiple services at the protest site, said he had heard enough people complaining about bodyaches and fatigue and not doing anything for them was just not an option.

"Staying out for this long, without any homely comfort, in trolleys or tents takes a toll on your body. It is that much difficult if you are old, and here a large majority of people are in their 50s and 60s. The massage centre is to strengthen the muscles worn-out during the ongoing protest," said the 22-year-old from Punjab's Gurdaspur district.

The massage centre, started three days back, opens as early as five in the morning and works till five in the evening.

Mr Singh, who has been camping here for the past two months, is joined by a couple of volunteers for this noble service.

"It is a sewa. We don''t keep a count of people coming. But since you have asked, the numbers are increasing by the day," said Mr Singh as he gently rubs the foot of an elderly person with the herbal oil.

Mr Singh, who says he gets to sleep only "five hours a day", is juggling other responsibilities too like helping the old get hot water in the morning for bathing, opening a makeshift reading room well-stocked with books -- on farmers revolution, biography of freedom fighters -- and volunteering at a nearby milk langar.

The young and old benefitting from the services of the massage centre are all praises for Singh and his dedication towards the movement and its people.

"My knee was giving me trouble for several days now. Yesterday, my friend told me about Singh and how effective the massage has proven for his joint pain.

"I went to him and he massaged my knee also. I felt a lot better. Today, I have come for another round. May god bless him and other volunteers for helping us," said Satwinder Singh (55), a farmer from Ludhiana.

While routine everyday activities -- like preparation and distribution of langar food, farmers making motivational speeches from stages, and tractors blaring protest songs -- went on as usual; the Delhi-Haryana Highway, the epicentre of the ongoing farmers'' agitation, witnessed a rather slow day on Tuesday with both -- the crowd and security forces -- thinning out.

Additional deployment of Delhi Police personnel at the three main farmers protest sites of Singhu, Tikri and Ghazipur was withdrawn from Monday evening.

According to an order issued by Special Commissioner of Police (Operation and Licensing) Muktesh Chander the entire staff will go back to their respective districts or units with effect from Tuesday.

Thousands of farmers have been protesting since late November at the Delhi borders with Haryana and Uttar Pradesh, demanding a rollback of the Farmers' Produce Trade and Commerce (Promotion and Facilitation) Act, 2020; Farmers'' (Empowerment and Protection) Agreement on Price Assurance and Farm Services Act, 2020; and Essential Commodities (Amendment) Act, 2020.

The protesting farmers have expressed apprehension that these laws would pave the way for the dismantling of the minimum support price (MSP) system, leaving them at the "mercy" of big corporations.

However, the government has maintained that the new laws will bring better opportunities to farmers and introduce new technologies in agriculture.