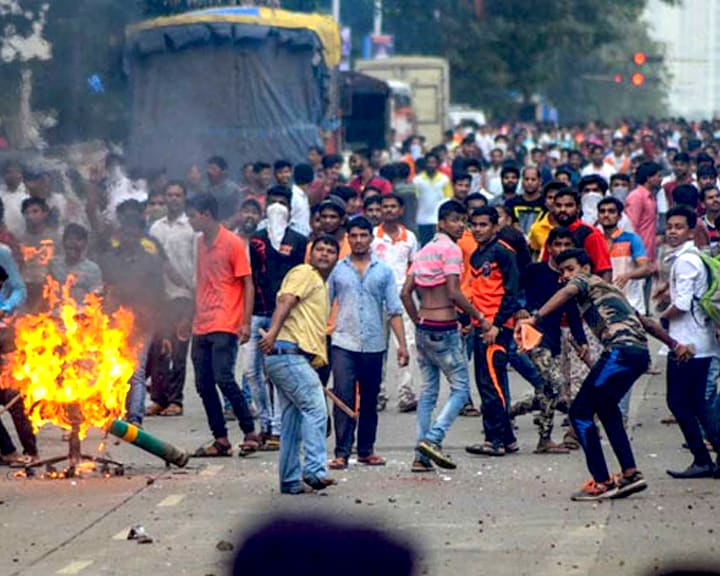 Sakal Maratha Samaj, an umbrella body of Maratha groups, today said a 'bandh' would be observed across Maharashtra, except Navi Mumbai, tomorrow to press for the community's demand for reservation.

A leader of the organisation said the protest would be held in a peaceful manner from 8 am to 6 pm.

"It will be a state-wide bandh, excluding Navi Mumbai. All the essential services, schools and colleges have been excluded from the bandh," Amol Jadhavrao, a leader of Sakal Maratha Samaj told reporters.

"Due to some sensitive issues, we have decided not to observe bandh in Navi Mumbai," he said.

Around 20 policemen, including eight officers, were injured in stone-pelting by protesters at Kopar Khairane and Kalamboli. A protester, injured in the violence in Navi Mumbai, had died from injuries.

Mr Jadhavrao said, "It will be a peaceful protest from 8 am to 6 pm. I appeal to my fellow Maratha youth to desist from committing suicides. It is not going to help the community and its cause."

A number of people from the community had earlier committed suicide in support of the quota demand.

"We are also making an appeal to Maratha youths to stay away from violence. We will not indulge in any aggressive protest and there will be no damage to public properties," he assured.

Mr Jadhavrao alleged that Maharashtra Chief Minister Devendra Fadnavis was talking to only a handful of Marathas and trying to create confusion within the community.

"Fadnavis is trying to dilute the intensity of the agitation," he said.

Commenting on different views expressed by separate Maratha groups in the last few days, he said, "The confusion was created after the agitators in Parli (in Beed district) suddenly decided to withdraw their agitation."

"But meetings were held in Aurangabad and Mumbai, where rest of the Maratha groups expressed their willingness to go ahead with the bandh. Hence, tomorrow we are going to observe bandh," Mr Jadhavrao said.

Another Maratha faction has given a call to only hold a sit-in outside the Mumbai suburban district collector's office.

"We have given a call for a peaceful agitation. We have no intention to cause a contempt of court. The coordinators of Maratha morcha from Navi Mumbai can participate in the agitation in Mumbai," he said.

"Fadnavis should give a time-bound programme for giving quota to the community on his letterhead and we will withdraw our agitation," Mr Jadhavrao said.

The Bombay High Court had on Tuesday urged the Maratha community members to refrain from resorting to violence or committing suicide over their demand for reservation in government jobs and education.

The high court was hearing a plea filed by the Maratha Kranti Morcha, seeking quota and directions to the backward classes commission to submit its recommendations to the state on entitlement of such quota expeditiously.

Marathas, a politically influential community constituting around 30 per cent of the state's population, have been demanding 16 per cent reservation. The community had earlier taken out silent marches across the state to highlight their demands, prominent among them being that of reservation.

The agitation, however, turned violent after a 27-year-old protester jumped to his death in Godavari River near Aurangabad on July 23.

Violence had also erupted at Chakan near Pune during the Maratha quota agitation in the last week of July. Four policemen had been injured in stone-pelting during the protest at Chakan, where the mob also damaged nearly sixty vehicles, including state and civic-run buses and police jeeps.

Meanwhile, police in Maharashtra are gearing up to prevent violence during the bandh called by Maratha organisations demanding reservations on August 9, an official said in Mumbai.

There would be a heavy deployment of security personnel, especially in sensitive pockets where violence had taken place during the agitation earlier, a senior police official said.

The protests would be videographed. The videos and CCTV footage will help police identify criminals and mischief-mongers who may try to take advantage and indulge in violence, the official said.

According to police, between July 18 and 27, 276 cases of violence were registered across the state during the quota agitation. There were incidents of stone pelting at over 250 places and 198 incidents of arson, he said.

More than Rs 4.5 crore-worth public and private property was damaged within 10 days, a police official said.