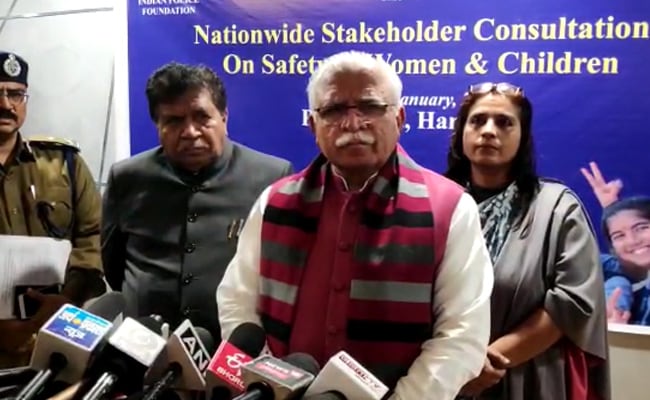 Haryana Chief Minister Manohar Lal Khattar today backed the state's self-appointed village courts, Khap panchayats, on their stand that marriages between people of same gotra- which refers to a clan or a descendant from a common ancestor - should not happen. His remark comes despite the Supreme Court's observation, made in 2018, that such courts cannot stop two consenting adults from marrying.

"It has been scientifically proven that same gotra marriages, which are opposed by Khap panchayats, should not happen. It is a belief in villages and Khap panchayats that there is a relationship of brother and sister (between men and women of same gotra). If we conduct ourselves according it, it has an impact on society," he said at a conference on safety of women and children in Panchkula.

"In Gujarat, women are called sisters, men are called brothers- marriage is an ancient tradition. If we conduct ourselves like this, people who commit such types of crimes (against women) will think they should not commit such crimes," he added.

Khap panchayats oppose same gotra marriages arguing that the practice weakens the generation genetically. Several people had been killed in the state over such marriages.

The Supreme Court had taken up the matter in 2010 after a non-profit approached it following repeated incidents of dishonour killings. The then Chief Justice of India Dipak Misra had remarked in a hearing, "Whether it is parents, society or anyone, they are out of it. No one, either individual or collective, or group, has the right to interfere with the marriage".

Mr Khattar, who had won his second term as Chief Minister last year, is known for making controversial comments. He had said last year that women file false rape cases to get back at estranged male friends. After uproar over his remark, he had put out a defence, and had said his remark was backed by "research"

"I didn't say sehmati (consent). I said people who know each other. That's where rapes occur. I am not the only one saying this. There's research to back it. There shouldn't be politics into this," he had said.