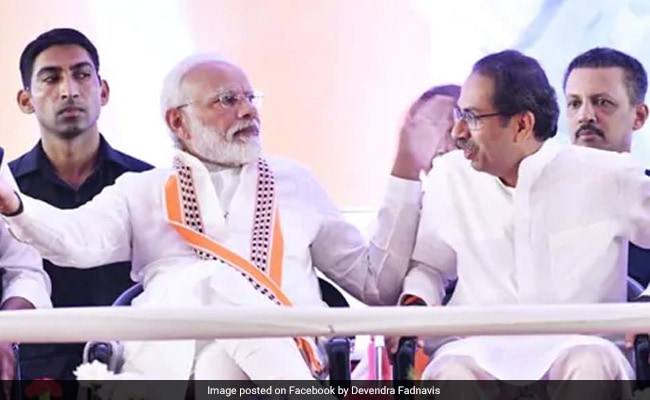 Prime Minister Narendra Modi should cooperate with his "younger brother from Maharashtra" Uddhav Thackeray, the state's new Chief Minister, the Shiv Sena said in an outreach to its former ally less than 24 hours after taking power in alliance with the Congress and Nationalist Congress Party (NCP) on Thursday.

PM Modi had congratulated the Shiv Sena chief after he was sworn in with six ministers last evening. "Congratulations to Uddhav Thackeray Ji on taking oath as the CM of Maharashtra. I am confident he will work diligently for the bright future of Maharashtra," the Prime Minister tweeted.

The Sena responded to the Prime Minister's wishes in an editorial in its mouthpiece ''Saamana'' this morning: "The BJP-Shiv Sena are sharing strained relations in Maharashtra politics, but (Narendra) Modi and (Uddhav) Thackeray share brotherly ties... Hence, as prime minister, it is the responsibility of Shri Modi to cooperate with the younger brother from Maharashtra."

The Sena ended its alliance with the BJP, its partner of over three decades, over its demand for equal share in power including rotational chief ministership. The BJP had emerged as the single-largest party in the Maharashtra assembly election last month.

The editorial said the Prime Minister does not belong to any single party, but the entire country. "Delhi should respect the decision the people of Maharashtra have taken and take care that the stability of the state government is not bedevilled," the party said in its Marathi mouthpiece.

"Delhi is the capital of the country for sure. But Uddhav Thackeray, son of Balasaheb Thackeray, who took a firm stand all along that Maharashtra is not slave to Delhi, has now become chief minister. So, it is certain that the government will have its spine intact," it added.

Mr Thackeray had called up PM Modi on Wednesday evening and invited him to Mumbai for his oath ceremony.

Former Chief Minister Devendra Fadnavis of the BJP quit on Tuesday after a huge controversy over the manner in which he took power.