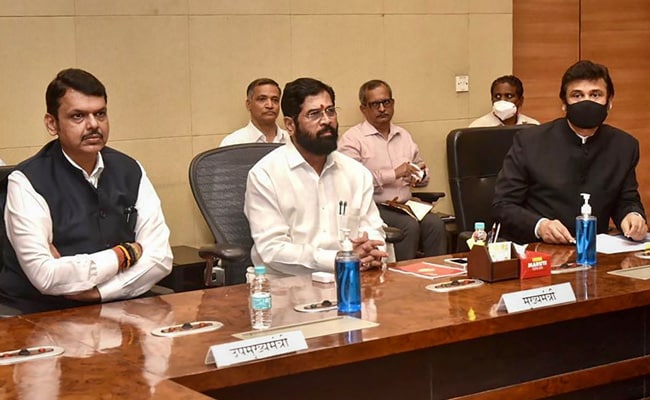 The newly formed Eknath Shinde government in Maharashtra will have to prove its majority in the state assembly on Monday. A special session of the Maharashtra Assembly will be held on July 3 and 4. After taking oath yesterday, Mr Shinde moved to reverse the Uddhav Thackeray government's stand on the controversial Metro car shed project in Mumbai.

Mr Shinde, it is learnt, has directed Advocate General Ashutosh Kumbhakoni to submit in court that the Metro car shed will be built at Aarey Colony as planned in 2019 under the Devendra Fadnavis government.

Get NDTV UpdatesTurn on notifications to receive alerts as this story develops.
Jul 01, 2022 17:11 (IST)
Congress blames BJP for rescheduling of special two-day Maharashtra assembly session
The Maharashtra Congress on Friday claimed that the special session of the state Assembly has been rescheduled from July 2 to July 3 because it coincides with the BJP's national executive meeting.
Jul 01, 2022 16:20 (IST)

Uddhav Thackeray Wonders Why BJP Refused Sena The Top Post In 2019
Shiv Sena president Uddhav Thackeray on Friday questioned BJP's decision to install a "so-called Shiv Sainik" as Maharashtra chief minister when it did not keep its 2019 promise of rotating the Chief Minister's post.
Jul 01, 2022 16:00 (IST)
Eknath Shinde, rebel Maharashtra MLAs paid Guwahati hotel bills before leaving
Maharashtra Chief Minister Eknath Shinde and the rebel Shiv Sena MLAs who had camped at a Guwahati luxury hotel for eight days have cleared their bills before they checked out on Wednesday, a hotel official said.

Though the hotel officials are tight-lipped on the total bill, sources said Rs 68-70 lakh were paid for their stay in the upscale Radisson Blu hotel located at Gotanagar near Jalukbari.
Jul 01, 2022 15:06 (IST)
Had Amit Shah kept his word: Uddhav Thackeray's cutting rejoinder
The day after his replacement took charge as Chief Minister of Maharashtra, Uddhav Thackeray had a succinct rejoinder for his rival, the BJP. "If Amit Shah had kept his word to me, Maharashtra would have a BJP Chief Minister by now."
Mr Thackeray's invoice, issued in his first media briefing after he resigned on Facebook two nights ago, makes the same point that other politicians and commentators have argued - if the BJP were willing to give up the post of Chief Minister for an outsider, why didn't it just do so in 2019?
Jul 01, 2022 15:03 (IST)

Eknath Shinde, New Maharashtra Chief Minister, Highlights Devendra Fadnavis' "Masterstroke"
Maharashtra Chief Minister Eknath Shinde has said his elevation to the top post is due to the masterstroke by BJP leader Devendra Fadnavis.
Jul 01, 2022 14:23 (IST)
Uddhav Thackeray says 'had Amit Shah kept his word, there would have been a BJP chief minister in Maharashtra now": news agency PTI
Jul 01, 2022 14:22 (IST)
"They said they'll disturb us, but we won't": Sena's Sanjay Raut jabs BJP
Shiv Sena leader Sanjay Raut today while alleging that the BJP vowed to "disturb" the Uddhav Thackeray government the day it came to power in 2019, said that his party would not do the same and the new administration "must work for the public". (Read full story here)
Jul 01, 2022 13:39 (IST)

Oath Taken, Chief Minister #EknathShinde In Goa To Get His Team Back https://t.co/Nk0aHIU1Rm

Jul 01, 2022 11:59 (IST)
Eknath Shinde is likely to leave for Mumbai today again, sources said. Rebel MLAs, meanwhile, will leave tomorrow.
Jul 01, 2022 11:53 (IST)
The session of the Maharashtra Legislative Assembly will now be held on Sunday and Monday. The nomination for the post of president will be held on Saturday.
Jul 01, 2022 11:37 (IST)
Eknath Shinde has been asked by the Supreme Court to prove his majority in the Maharashtra assembly on Monday.
Jul 01, 2022 11:35 (IST)
Team Thackeray's fresh move against Eknath Shinde
Former Maharashtra Chief Minister Uddhav Thackeray has asked the Supreme Court to restrict Shiv Sena MLAs from participating in assembly proceedings. "The delinquent MLAs who have been acting as pawns of the BJP, thereby committing the constitutional sin of defection, ought not to be allowed to perpetuate their sin even for a single day by permitting them to continue as members of the assembly," Team Thackeray said in a petition to the Supreme Court today. (Read full story here)
Jul 01, 2022 09:53 (IST)
Eknath Shinde reverses big Uddhav Thackeray decision in 1st move: Sources
Hours after he took over as Maharashtra Chief Minister, Eknath Shinde has moved to reverse the Uddhav Thackeray government's stand on the controversial Metro car shed project in Mumbai, sources have said. Mr Shinde, it is learnt, has directed Advocate General Ashutosh Kumbhakoni to submit in court that the Metro car shed will be built at Aarey Colony as planned in 2019 under the Devendra Fadnavis government. (Read full story here)
Jul 01, 2022 09:38 (IST)
Maharashtra To Get New Assembly Speaker Tomorrow
A special session of the assembly has been called this weekend during which a new Speaker will be elected from among the MLAs.
Jul 01, 2022 09:37 (IST)
For all the updatesfrom yesterday, click here