"They Said They'll Disturb Us, But We Won't": Sena's Sanjay Raut Jabs BJP

Sanjay Raut said, "I congratulate this government. I welcome them. When the Uddhav Thackeray govt came, they were saying from the first day that they will disturb him. But we won't do that. We won't disturb this government, they must work for the public." 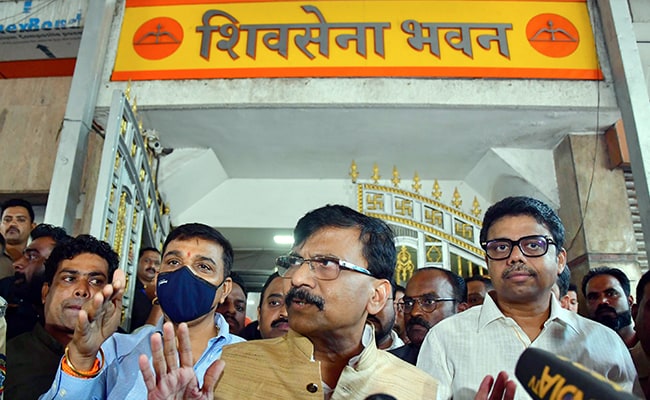 Shiv Sena leader Sanjay Raut today while alleging that the BJP vowed to "disturb" the Uddhav Thackeray government the day it came to power in 2019, said that his party would not do the same and the new administration "must work for the public".

The remarks of the Shiv Sena leader came a day after Eknath Shinde, who led the revolt against Uddhav Thackeray, was sworn in as the Chief Minister of Maharashtra along with Devendra Fadnavis who was sworn in as his Deputy.

Speaking to the media, Mr Raut said, "I congratulate this government. I welcome them. When the Uddhav Thackeray govt came, they were saying from the first day that they will disturb him. But we won't do that. We won't disturb this government, they must work for the public."

Despite 39 Shiv Sena MLAs revolting against Mr Thackeray and joining the Eknath Shinde faction, Mr Raut denied the weakening of the organisation.

"I don't think our organisation ever weakened...Nobody is upset," he said when asked if the party has weakened and if upset MLAs will now be happy after Eknath Shinde became Chief Minister.

Meanwhile, Sanjay Raut has been summoned by the Enforcement Directorate in connection with a money-laundering case.

Calling the summon "totally political", he said that he will visit the Enforcement Directorate office today.

"Yes, I am going to ED today. Everyone knows that it is totally political. The central agency summoned me and I am a citizen as well as MP. So I will go to ED," Mr Raut said.

"I will be appearing before the ED today at 12 noon. I respect the summons issued to me and it's my duty to co-operate with the investigation agencies. I appeal to Shiv Sena workers not to gather at the ED office. Don't worry!" Mr Raut said in a tweet.

He attached a photo of himself standing in front of a portrait of the late Bal Thackeray, the founder of the Shiv Sena.

Mr Raut is being probed in connection with the re-development of Mumbai's Patra Chawl.

In April this year, the Enforcement Directorate had attached immovable properties worth Rs 11.15 crore, including a flat at Dadar, held by Sanjay Raut's wife Varsha and eight land parcels at Kihim near Alibag, jointly held by the latter with Swapna Patkar, in connection with the redevelopment scam. Swapna is the wife of Sujit Patkar, a close associate of the Sena leader.