Maharashtra Elections 2019: Crowd Cheers For PM Modi During Pune Rally Speech, He Responds With A Gesture

The BJP has made the scrapping of Article 370 its main talking point in the assembly elections in Haryana and Maharashtra. 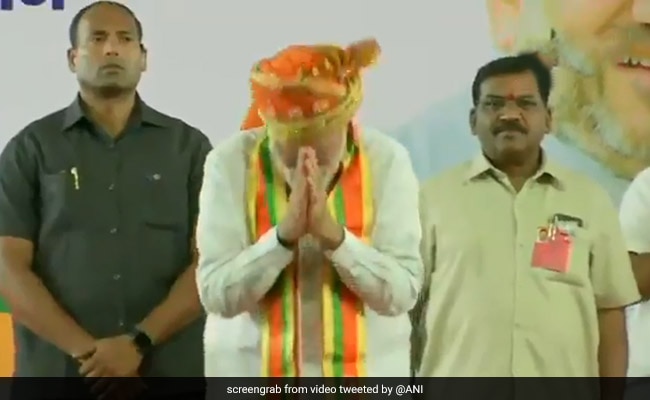 PM Modi's video is being widely shared on social media.

Prime Minister Narendra Modi, who was addressing a rally in poll-bound Maharashtra's Pune district on Thursday, made a surprising gesture to his audience while speaking on his government's recent decision to scrap Article 370, which granted special status to Jammu and Kashmir. As the crowd cheered for him, he halted his speech, stepped aside from the dais and bowed before the public twice.

"Friends, you are experiencing the power of unity with the government's decisions. The countrymen today talk about these things. This decision is (removal) of Article 370, which has paved the way for a new future of Jammu and Kashmir and Ladakh," PM Modi said at the rally.

"For 70 years, Article 370 was proving to be an impediment in the way of the spirit of 'one country, one constitution'. Many talked about doing away with this impediment...," he said, before he was interrupted by the crowd, which cheered for him.

#WATCH Maharashtra: Prime Minister Narendra Modi bows down before the people while speaking about the abrogation of Article 370, at a public rally in Pune. #MaharashtraAssemblyPollspic.twitter.com/O0Cy28mEep

On August 5, the centre ended special status to Jammu and Kashmir and split the state into two union territories. Before announcing its decisions in parliament, the government had imposed restrictions in the state, including detaining or arresting regional politicians and blocking telecom communication. While the BJP had called the decision historic, the Congress had slammed the centre for not consulting with stakeholders.

The BJP has made the scrapping of Article 370 its main talking point in the assembly elections in Haryana and Maharashtra.

PM Modi last week challenged the opposition on its complaints about the government's Kashmir move, asking them to reverse it "if they dare".

While addressing a rally in Maharashtra's Beed, he offered to "make arrangements" for people who want to visit Jammu and Kashmir, taking a swipe at the Congress, which had attacked the centre over restrictions.

"Do you remember what kind of statements they (Congress leaders) made after Article 370 was abrogated? One leader said it's not India's internal matter. Shouldn't we punish (those who make) these kind of statements? Another Congress leader said this was a decision that will destroy India. Has the country been ruined? Have we lost Kashmir? If you want to go to Kashmir, tell me, I will make arrangements," PM Modi said.

The centre says the restrictions will be lifted in a phased manner. On Monday, it restored post-paid mobile services.

Polling in Maharashtra and Haryana will take place on October 21. Counting will happen on October 24.