Maharashtra Election: The Congress had vehemently opposed the government's move to scrap the special status of Jammu and Kashmir under Article 370, announced in parliament in August

Prime Minister Narendra Modi on Sunday challenged the opposition on its complaints about the government's move on Jammu and Kashmir, asking them to reverse it "if they dare".

"Do you think anyone has the courage to bring it back? Will their political career survive if they dare to?" he said in what was seen as a direct challenge to Rahul Gandhi, who also campaigned in the state on Sunday.

The BJP has taken up the move to scrap the special status of Jammu and Kashmir under Article 370 of the Constitution and bifurcate it into two union territories as one of the key themes in the coming round of state elections that will be held later this month.

The Congress had vehemently opposed the government's move - announced in parliament in August -- maintaining that Jammu and Kashmir acceded to India "as one State" and no government has the power to change its status or divide it or reduce any part of it to a Union Territory.

"If you dare, take a clear stance and come forward," Prime Minister Narendra Modi said on Sunday while addressing a rally in Maharashtra's Jalgaon.

"I challenge them, if they have the guts, declare in their manifesto for the state election and future polls too, that they will bring back Article 370 and 35A, which the BJP, the Modi government scrapped... that they will change the August 5 decision. Stop shedding crocodile tears," he said. 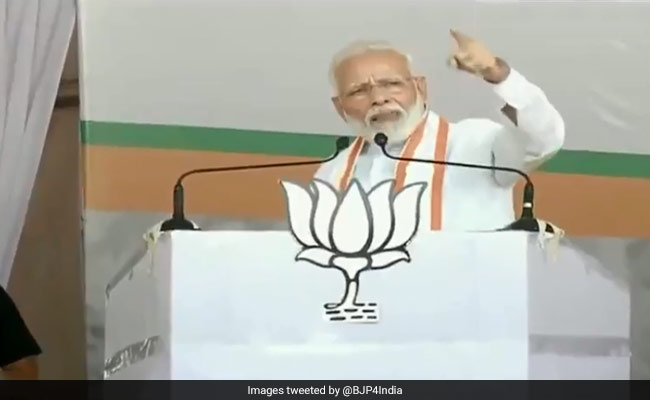 The BJP has taken up the move to scrap the special status of Jammu and Kashmir under Article 370 of the Constitution and bifurcate it into two union territories.

Last month, at a public meeting to explain how the government has executed its decision and reasons for it, Amit Shah had blamed former Prime Minister Jawaharlal Nehru for the formation of Pakistan-Occupied Kashmir (PoK), and said it was because of the "untimely ceasefire" declared in 1948.

"By abrogating Article 370 Narendra Modi has given this country a reason to celebrate nationalism," he had said at a rally in Maharashtra's Beed.

The BJP had also built their campaign for the April-May Lok Sabha elections around nationalism - a shift that took place soon after the terror attack in Jammu and Kashmir's Pulwama in February. Days later, the Air Force had conducted air strikes on a Jaish-e Mohammad terror camp at Pakistan's Balakot.

The BJP has repeatedly stressed on what it called the Congress's "inability" to take a similar step and projected the government's move in Jammu and Kashmir as one of the achievements in the second term of the Narendra Modi government.