What Aaditya Thackeray Did When Manohar Joshi Walked On Stage

Yuva Sena President Aaditya Thackeray is the first member of his family to stand for election - he will contest from the Worli seat, a party stronghold that has voted for the Shiv Sena in four of the last five elections 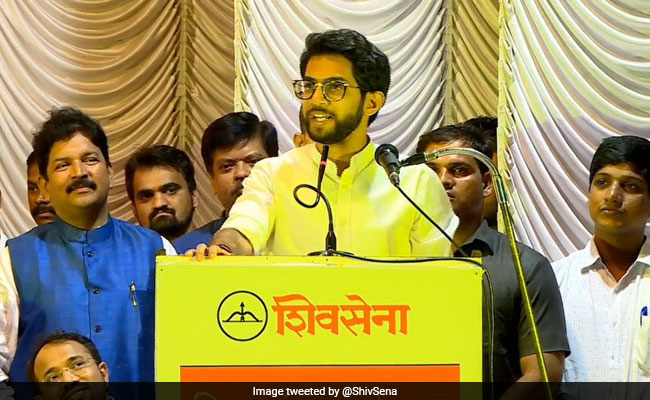 Aaditya Thackeray, son of Shiv Sena chief Uddhav Thackeray, has long been groomed for a leadership role and that training was in evidence in Mumbai on Monday, when he paused mid-speech, just as he was about to announce his candidature for the Maharashtra state election later this month, to welcome veteran Sena leader Manohar Joshi to the stage.

On Monday evening, Mr Thackeray, 29, who is being pitched as the more liberal and affable face of the party, was addressing a packed gathering when Manohar Joshi, 81, a former Chief Minister, appeared on stage. The young Thackeray stopped his speech and walked across to welcome Mr Joshi with folded hands.

He then bent down to touch the senior leader's feet and held his hand while directing him to his seat, as a large round of cheering and applause broke out.

Nice to see this gesture from @AUThackeray Stopping his speech midway as a senior party leader and former Chief Minister #ManoharJoshi arrives and giving him the respect he deserves as an elder. Humility is refreshing in politics. pic.twitter.com/moWD5XSn1h

Mr Thackeray is the first member of his family to stand for election. He will contest from the Worli seat, a party stronghold that has voted for the Shiv Sena in four of the last five elections; the exception was in 2009 when NCP leader Ahir Sachin Mohan won. It is currently held by Sena leader Sunil Govind Shinde.

"I am contesting the elections... I have taken the big plunge. I am sure of victory as I have the blessings of you all," Mr Thackeray said at the event. Sporting a saffron headgear and wearing a yellow shirt and black pants, he also held aloft a sword, cheered by workers, to mark his new outing.

"I believe I cannot do anything else. I have to serve the people. I have to do what my grandfather (Bal Thackeray) taught me," he said.

No member of the Thackeray family has contested an election or even held a constitutional post since patriarch Bal Thackeray founded the Shiv Sena in 1966.

The change in policy is believed to be driven by the need to have a strong voice from within the family in the Maharashtra assembly, to rebuild the party in the long-term, with the BJP overtaking it as the single largest in Maharashtra.

The Sena has been projecting Aaditya Thackeray as the chief ministerial face if the BJP-led National Democratic Alliance (NDA) returns to power.

In the 2014 election, the BJP and the Sena contested separately after failing to agree on seat-sharing. Mr Thackeray was then too young to contest. The BJP emerged as the largest party, winning 122 of the 260 seats it contested. The Sena won 63 of 282 seats and entered a post-poll alliance with the BJP, which has remained strained since. The Congress and the NCP won 42 and 41 seats respectively.

Elections in Maharashtra are scheduled for October 21 and results are expected three days later.