Namita Mundada resigned from the NCP following which she was joined the BJP in Beed district in the presence of BJP's Lok Sabha member Pritam Munde and state minister Pankaja Munde. 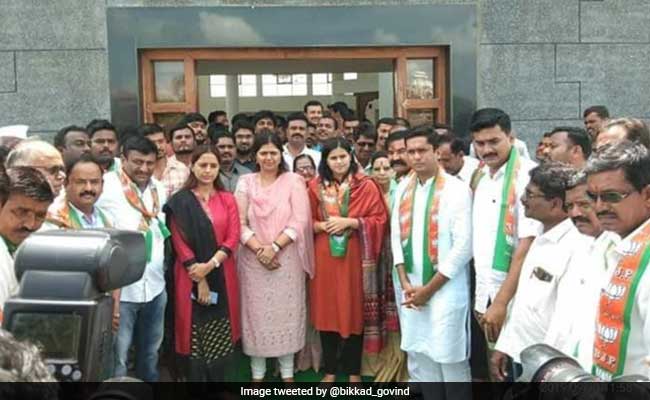 In a setback for the Opposition ahead of the Maharashtra Assembly polls, NCP leader Namita Mundada, who was given party ticket to contest from Kaij, Vanchit Bahujan Aghadi (VBA) leader Gopichand Padalkar and Congress MLA Kashiram Pawara joined the BJP today.

Her candidature from Kaij seat in Beed was earlier this month announced by NCP chief Sharad Pawar for the Assembly elections, scheduled to be held on October 21. During the 2014 state polls, she lost to BJP's Sangeeta Thombre from Kaij seat.

Her mother-in-law Vimal Mundada was a former state minister from the NCP.

While inducting Mr Padalkar into the BJP, Fadnavis said, "He is like a tiger, who should challenge a major established leader. If he is ready, I will try to field him from Baramati Assembly seat."

Baramati has been a stronghold of the NCP after Sharad Pawar formed the outfit in 1999. His nephew Ajit Pawar has been representing the constituency for over a decade. Kashiram Pawara, who won from Shirpur seat on Congress ticket, is a close associate of party MLC and former minister Amrish Patel from Dhule district.

After inducting him into the BJP, Chandrakant Patil said, "With Pawara, I am hopeful that Patel will also join the BJP in coming days. We are planning to hold one more such function here to welcome some more leaders."