Watch: Workers Made To Push Train Wagon After Snag In Madhya Pradesh 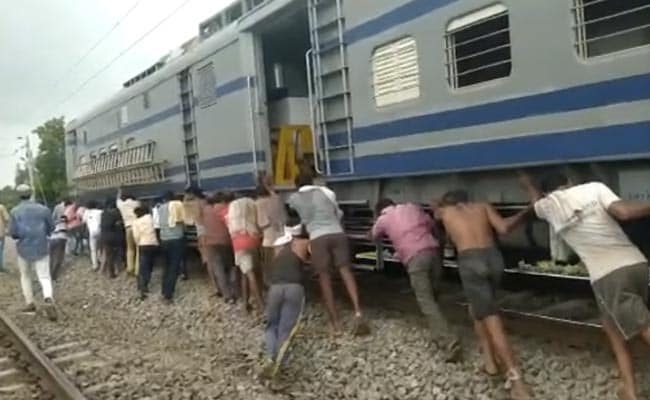 A technical fault with a tower wagon (a self-propelled unit used to inspect over-head cables powering electric locomotives) at a railway station in Madhya Pradesh's Harda led to a heartbreaking sight - around three dozen people forced to manually push the wagon from the main line to another track.

A video of the incident showed the labourers, who'd been summoned from a nearby rake point, and other citizens, gathered in a line along one side of the wagon, with their legs dug in to the sharp gravel and crushed stones that are packed around rail tracks.

Some of the men don't even seem to have footwear to protect themselves from the stones.

The entire operation took over an hour, some reports said, and led to delays for some trains.

A technical fault with a tower wagon at Harda led to a heartbreaking sight - people forced to manually push the wagon from the main line to another track @ndtv@ndtvindiapic.twitter.com/WQTO0xhfEx

The incident in Madhya Pradesh comes days after Railways Minister visited passengers on board an overnight train from Odisha capital Bhubaneswar to the state's Rayagada district.

A former IAS officer who was given charge of both Railways and the IT ministries, Mr Vaishnaw was filmed speaking to some passengers who praised the train and Indian Railways' facilities.

Earlier this week Civil Aviation Minister Jyotiraditya Scindia, who hails from Madhya Pradesh, declared India would soon have 'air taxi' services that would rival the likes of ride-hailing app Uber.

"Air taxis are being researched globally... and many startups are coming up. The time is not far when like taxis that you see on roads, like Uber, etc., you will see see taxis in the air under the new drone policy. I believe this is very possible," Mr Scindia said.