"Is This Democracy?": Congress, BJP Spar In Top Court Over Madhya Pradesh

Madhya Pradesh Crisis: BJP had gone to the Supreme Court asking for an immediate floor test, while the Congress has sought to defer this and alleged its MLAs had been abducted 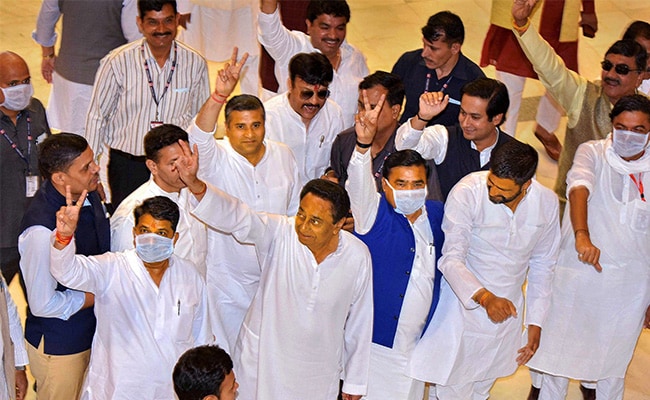 The BJP is destroying democracy by muzzle power, the Congress claimed in the Supreme Court today as the two heavyweights of Indian politics locked horns over the Madhya Pradesh government crisis. After a day of dramatic arguments and a verbal spat between senior advocates Dushyant Dave and Mukul Rohatgi, which prompted Justice DY Chandrachud, who is heading the two judge-bench in this matter, to intervene and soothe Mr Dave's nerves, the hearing is set to continue on Thursday.

Appearing for the Congress, Dushyant Dave accused the BJP of abducting MLAs and hatching a "conspiracy" to destabilise the government. Seeking a deferment of the trust vote called by the BJP till completion of by-polls, Mr Dave said "heavens are not going to fall if Congress is allowed to continue till by-polls" and "Shivraj Singh Chouhan's government must not be saddled on the people".

Mr Dave also hit out at Governor Lalji Tandon for an "unconstitutional" floor test and "middle of the night" messages, asking: "Is this a democracy? Where MLAs are kidnapped?" Alleging constitutional impropriety by the Governor, Mr Dave asked how the Governor had been so confident in his knowledge that the Kamal Nath government had lost its majority.

The BJP hit back by accusing the Congress of stalling a trust vote it could not hope to win and that the party "responsible for the mass murder of democracy" had "no legal right to remain in power". Mukul Rohatgi, appearing for the BJP, also insisted that the Congress was "desperate for power" and that the rebel MLAs had not been kidnapped and were "on their own".

"These MLAs do not want to go to Bhopal. They have resigned. It is not a case of defection or merger," he added. Dismissing the claims of abduction, Mr Rohatgi told the court that the only question before it was whether the Governor's mandate of a floor test had to be followed.

"Didn't he (the Governor) have enough reasons to come to a prima facie conclusion? If that is a reasonable view to take, that is the end of the matter. Nothing warrants this court to interdict the direction of a constitutional authority," he said.

Meanwhile, amidst the back and forth between the Congress and the BJP, Maninder Singh, the senior advocate for the rebel MLAs also rubbished allegations of abduction and said all the lawmakers had resigned out of their own free will - a point made in videos released this morning after senior Congress leader Digvijaya Singh tried to meet them but was stopped by police.

"Our resignation is only with the intent of strengthening democracy. We resigned due to our ideologies. We say this government has lost people's faith and must go for floor test," Mr Singh said, adding that the Speaker could not sit on the MLAs' resignations "indefinitely".

However, Congress leader Abhishek Singhvi, appearing for Madhya Pradesh Speaker NP Prajapati, claimed there was "jugaad (tricks)" going on and that there were suspicious similarities between the resignation letters.

"Of the 19 resignation letters, seven have been written by one person and signed by different MLAs. Two have written six each of the remaining. Letters are almost identical and have two lines," he said, adding, "The object is that there should not be immediate by-poll (but) bring the strength of Assembly down so those who had minority now have majority".

Justice DY Chandrachud, heading the two-judge bench hearing this matter, said the issue of resignations would be tested by the Speaker, who was "duty-bound to conduct an inquiry".

"We are not going to come in the way of the legislature to decide who enjoys the trust. We do know that these 16 tilt the balance in one way or the other. Just assist us as to what should be the modality of this," the court said in response to the arguments.

However, on the question of MLAs being held in captivity, he said: "We have to see". "We aren't saying they are held captive. Our concern is to allay the apprehension," Justice Chandrachud added.

Earlier in the day Mr Dave told the court that the ongoing hearing "is not just the question of a floor test. It is the question of destroying democracy by muzzle power".

"First there was an attempt to whisk away MLAs to Bengaluru using allurement and force. (Then) senior BJP leaders reached residence of Speaker and handed over resignation letters. None of the MLAs were present. This demonstrates complicity of BJP," he argued in court today.

The court was also urged to probe the letters submitted by the BJP leaders, claiming it and their actions violated provisions of the constitution and rules regarding submission of such documents.

Twenty-two MLAs submitted letters of resignation this month. The resignations, some of which have yet to be accepted, have left Chief Minister Kamal Nath's government on the back foot.

The majority mark in the Assembly is now 112 after six MLAs' resignation was accepted on Saturday. The BJP has 107 seats and the Congress has 108, including the 16 whose resignations have yet to be accepted.

The BJP has gone to the Supreme Court asking for an immediate floor test. Governor Lalji Tandon has twice asked Chief Minister Kamal Nath to prove his majority but the Congress has accused him of "pre-determining" that the party is already in a minority.