Madhya Pradesh Ahead Of Other States In Agriculture Infrastructure: Union Minister

Union Agriculture Minister Narendra Singh Tomar also said that Madhya Pradesh will emerge as a "model state" in the country in the agriculture sector by working on a mission mode. 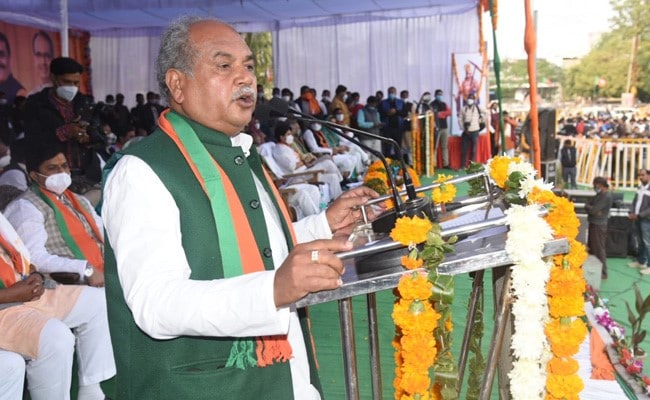 Union Agriculture Minister Narendra Singh Tomar said that Madhya Pradesh is ahead of many other states in the country in developing infrastructure in the farm sector.

He also said that out of the Rs 10,000 crore-worth proposals that the Centre has received under its ambitious Agriculture Infrastructure Fund scheme so far, Madhya Pradesh's proposals are worth Rs 1,000 crore.

Mr Tomar said this while chairing a meeting at the state secretariat here with Madhya Pradesh Chief Minister Shivraj Singh Chouhan and state Agriculture Minister Kamal Patel on Thursday on agriculture-infrastructure and other issues.

"The works (carried out) in the agriculture sector in Madhya Pradesh are capable of changing the lives of farmers. These works are very commendable. Prime Minister Narendra Modi has launched the Agriculture Infrastructure Fund for the development of agriculture infrastructure with a fund of Rs one lakh crore," a public relation department official quoted Mr Tomar as saying.

He also said that Madhya Pradesh has got the maximum loan facility under various schemes and the state is ahead of others in implementing agriculture infrastructure.

The state was doing a good job in PM Kisan Samman Nidhi scheme, National Agriculture Development Scheme and in uplifting the lives of its farmers, he said, adding that the Centre was also starting Digital Agriculture Mission for the welfare of farmers.

Mr Tomar also said that Madhya Pradesh will emerge as a "model state" in the country in the agriculture sector by working on a mission mode.

He also asked the state government to train "Kisan Mitra" (farmers' friends) for the overall welfare of the farm sector and develop an app for the working of Girdavari system (report prepared by patwari having all details related to agriculture land and crop acreage).

On the occasion, Mr Chouhan talked about the steps being taken by the state government for the development of agriculture and also said that the prime minister and the agriculture minister have assured that farmers would get Di-ammonium Phosphate (DAP) at Rs 1,200 per bag only even as its price has increased to Rs 2,400 per bag.

"Farmers will not have to pay higher cost for it as the government will raise the subsidy component to bridge the gap," he added.