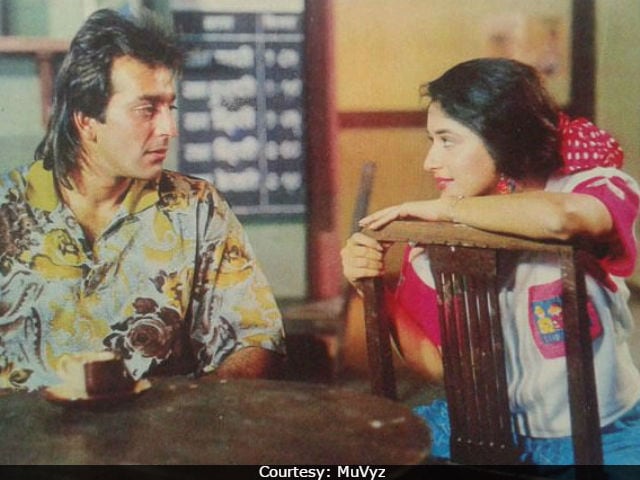 New Delhi: Actors Madhuri Dixit and Sanjay Dutt, co-stars of films such as Saajan and Khalnayak, were rumoured to have been dating in the 90s. Two decades later, filmmaker Rajkumar Hirani is believed to have approached the actress, now 49, while casting his biopic on Sanjay Dutt. Speaking to mid-day, Madhuri Dixit said that 'life has come a long way' since her reported romance with the troubled actor and dismissed the reports that she had been scouted by Mr Hirani, who directed Sanjay Dutt in the Munna Bhai films.

"For where I am today, this (the topic of Dutt) has become redundant. Life has come a long way since then," Madhuri Dixit told mid-day. Of rumours she had been asked to appear in the film by Mr Hirani, she said, "I don't know where these reports are coming from. In any case, it doesn't make a difference to me."

The biopic of Sanjay Dutt stars Ranbir Kapoor in the lead role. Actress Sonam Kapoor is believed to be playing a composite character based on the rumoured romances in the actor's personal life. Manisha Koirala and Karishma Tanna are also part of the film.

Promoted
Listen to the latest songs, only on JioSaavn.com
Sanjay Dutt married actress Richa Sharma in 1987 - she later moved to USA and died of cancer in 1996. He and Madhuri Dixit never acknowledged a relationship but are popularly supposed to have ended the rumoured affair after Khalnayak, the release of which coincided with Mr Dutt's arrest in a case connected to the 1993 Bombay Blasts. He was later sentenced to five years in prison for illegally possessing arms and completed his jail term last year. He recently wrapped work on his comeback film, Bhoomi.

Madhuri Dixit had a tremendously successful career right up to 2002's Devdas, opposite Shah Rukh Khan. She made a comeback in 2007 with Aaja Nachle and then again in 2014 with Dedh Ishqiya. Madhuri married US-based doctor Shriram Madhav Nene in 1999. They have two sons and moved to Mumbai in 2011. "I want to reach out to as many people as possible so that we can discover more talent. But the entrepreneur never takes over the artiste in me. I can compartmentalise well, switching between roles," she told mid-day. She was last seen in Gulaab Gang and recently launched her dance show.