Mohan Bhagwat declared society must act by "remaining within the limits of Constitution", no matter what the "difference of opinion be, or howsoever provocative actions might have taken place"

RSS chief Mohan Bhagwat today described lynching as a "Western construct", saying it shouldn't be used to defame the country. Speaking at the annual Dusshera event in Nagpur, Mr Bhagwat said "... it is not that only a certain community targets people. The reverse also happens". The RSS chief then declared that society must act by "remaining within the limits of Constitution", no matter what the "difference of opinion be, or howsoever provocative actions might have taken place".

"We hear people of a community beat people from another community. It is not that only a certain community targets people. The reverse also happens. There are cases where what has actually happened gets twisted," Mohan Bhagwat said, adding,"... self-centred forces blame a particular community to stoke fire between communities".

"Branding some incidents of social violence as 'lynching' are actually meant to defame our country, Hindu society and create fear among some communities. Lynching is alien to Bharat and actually has its references elsewhere," he said at an RSS event organised on the occasion of Dusshera.

"Lynching itself is a Western construct. It is not the word from Indian ethos. Its origin is from a story in a separate religious text. Don't impose such terms on Indians," he claimed.

The Maharashtra unit of the Congress tore into Mohan Bhagwat's comments, calling them a "lie" and accusing the RSS of "spreading falsehood".

"It is as much a lie to say that RSS has nothing to do with lynchings as it is a lie to say that RSS is a cultural organisation, is anti-casteist, pro-reservation and respects the Constitution and tricolour," spokesperson Sachin Sawant said, adding, "Spreading falsehood is the ideology of the Sangh Parivar".

Mob killings and deaths from lynchings made headlines earlier this year with cases like 24-year-old Tabrez Ansari from Jharkhand, who was thrashed for hours and forced to chant "Jai Shri Ram" after allegedly stealing a motorcycle.

The killings prompted 49 eminent personalities to write an open letter to Prime Minister Narendra Modi to protest such incidents, which claimed the lives of Dalits, Muslims and other minorities.

"Dear Prime Minister... The lynching of Muslims, Dalits and other minorities must be stopped immediately. We were shocked to learn from the NCRB (National Crime Records Bureau) reports that there have been no less than 840 instances of atrocities against Dalits in the year 2016, and a definite decline in the percentage of convictions," the letter, signed by actor Aparna Sen and historian Ramachandra Guha, among others, read.

According to data collected by NDTV, 111 such incidents have taken place since 2015, leading to the loss of 44 lives. In 2019 alone there have been at least nine instances of lynching. 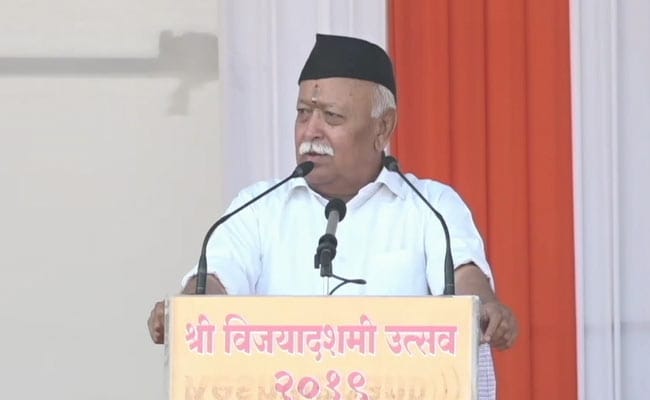 In his speech, Mohan Bhagwat voiced his displeasure against such incidents and urged citizens of the country to live in harmony, claiming that RSS volunteers ('swayamsevaks') are "brought up with that 'sanskaar' (value)".

He also highlighted the strong tradition of democracy in the country, declaring the Lok Sabha elections held earlier this year were a sign of the strength of that tradition.

"Democracy in India is not something imported from any country, but a practice which has been prevalent here since centuries," he said.

Earlier today Congress MP Shashi Tharoor also spoke about democracy, tweeting a letter he wrote to the Prime Minister in which he urged PM Modi to "affirm the constitutional principle of Article 19" and guarantee freedom of speech and expression, reminding him of a speech made in front of the US Congress in 2016 in which the Prime Minister called the Constitution of India "a holy book".

Mr Tharoor's letter was in response to an FIR, carrying charges of sedition, filed against the 49 eminent personalities who wrote to the Prime Minister. Mr Tharoor reminded the PM of what the Supreme Court said in 2018: "Dissent is the safety valve of democracy".