"Worse Than Hitler": HD Kumaraswamy's Offensive Against PM After IT Raids

"Modi is a dictator -- a man worse than Hitler. He is the worst prime minister who brought a bill to confiscate the personal properties of individuals," HD Kumaraswamy said. 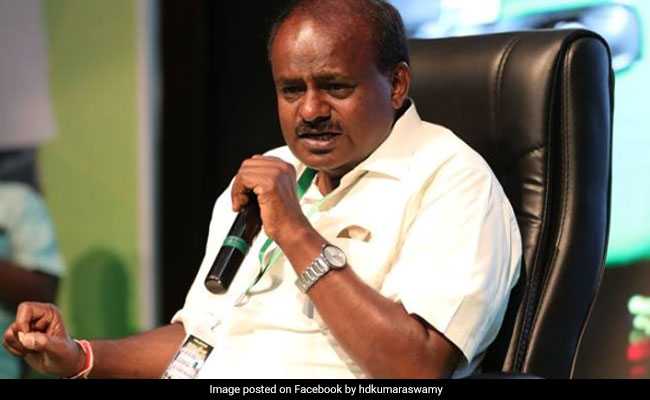 The newest politician to join the fray of leaders who compared Prime Minister Narendra Modi to German Dictator Adolf Hitler is Karnataka Chief Minister HD Kumaraswamy. Stepping up on his offensive against PM Modi over the recent statewide Income Tax raids on his partymen, Mr Kumaraswamy called the prime minister "worse than Hitler".

"Modi is a dictator -- a man worse than Hitler. He is the worst prime minister who brought a bill to confiscate the personal properties of individuals," he told his supporters on Tuesday night.

The Janata Dal (Secular) leader is also upset over the state Income Tax Commissioner's letter to the Election Commission seeking legal action against him and the Congress and JD(S) functionaries who protested against the action outside the I-T department.

Mr Kumaraswamy had led the protest outside the IT office on Queen's Road in Bengaluru following the raids, alleging that the Modi government was using central agencies to target the opposition as part of its politics of vendetta.

On Tuesday, Bengal Chief Minister Mamata Banerjee had alleged that PM Modi was "baptized in politics through riots and mass killings. He is the king of fascists. Had Adolf Hitler been alive, he would have committed suicide seeing Mr Modi's activities."

Just a few days prior to this, the Trinamool supremo had called PM Modi the "uncle of Hitler" at an election rally in Bengal's Cooch Behar.

Last month, after the New Zealand mosque attack, Congress leader Digvijaya Singh had compared PM Modi to Hitler and Mussolini, the most infamous dictators of the world.

"...We need Mahatma Gandhis, Martin Luther Kings and not Hitlers, Mussolinis and Modis," he said.

Arvind Kejriwal too had raked up the attack against the BJP government early this year saying, "This is part of BJP's scheme. Just like Hitler had done in Germany, the BJP is also planning to amend the constitution and eventually abolish the practice of elections altogether!"