"If Hitler Were Alive, He Would Have...": Mamata Banerjee Attacks PM

Speaking at a rally in Raigunj today, Mamata Banerjee accused the Prime Minister and his party of "using every central agency to muzzle the opposition." 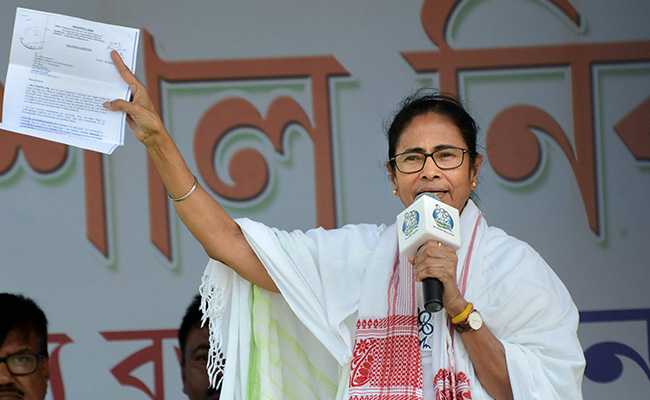 "PM was baptized in politics through riots and mass killings": Mamata Banerjee

It's the last 48 hours before West Bengal votes in the first phase of the seven-phase Lok Sabha elections and Chief Minister Mamata Banerjee has stepped up her offensive against Prime Minister Narendra Modi, alleging that he was "baptized in politics through riots and mass killings. He is the king of fascists. Had Adolf Hitler been alive, he would have committed suicide seeing Mr Modi's activities." The state is voting in all seven phases of the elections on April 11, 18, 23, 29, and May 6, 12 and 19.

Speaking at rally in Raigunj today, the Trinamool Congress chief accused the Prime Minister and his party of "using every central agency to muzzle the opposition."

"Mr Modi is self-absorbed...he got a film made on him...but remember he triggered the riots...no one has forgotten Gujarat," Mamata Banerjee hit out at the Prime Minister.

Ripping apart the National Register of Citizens (NRC), the Trinamool chief told the crowd, "They will drive you out" and on a threatening note said, "the BJP is daring us to implement NRC in West Bengal...let them try doing it...see what happens..."

Campaigning in Kolkata's historic Brigade Parade Ground, Prime Minister Narendra Modi, last week called Mamata Banerjee "speedbreaker Didi" and accused her of stalling the state's development. Hardly had the PM finished his campaign, Mamata Banerjee came back with "expiry babu"  and said once Mr Modi is "voted out of power, all of us will work towards building a new India."

The Chief Minister also blamed the Congress for failing to put up a strong fight against the BJP. "It is because the Congress failed to put up a credible fight against the BJP, the saffron party grew from strength to strength. The Rahul Gandhi-led party will have to seek help from others if it wants to form government at the Centre," Mamata Bnerjee stated. The Trinamool Congress will play a big role in government formation in Delhi, she claimed.

In West Bengal, the Trinamool Congress and the BJP are locked in a high stake prestige battle. The state is witnessing a high voltage campaign, with the BJP appearing as a direct challenger for the Trinamool in Lok Sabha elections.