General Election 2019: Tejashwi Yadav, who has taken charge of the Rashtriya Janata Dal (RJD) on behalf of his jailed father Lalu Yadav, has increasingly been at the receiving end of his brother's attacks over the past few days. 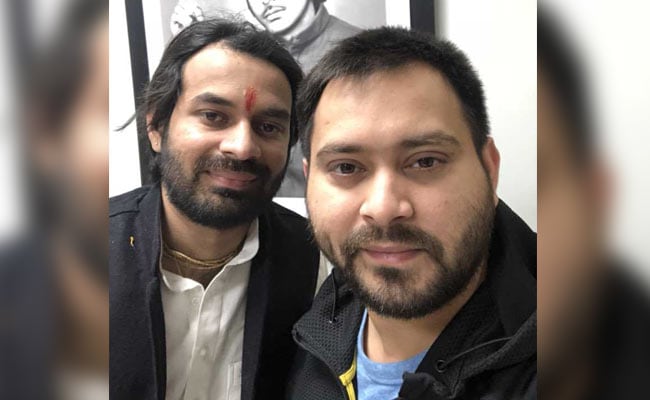 Lalu Yadav's sons Tej Pratap Yadav and Tejashwi Yadav are not getting along again. In peak election season, it means that the older and less politically astute Tej Pratap Yadav has been taking pot-shots at his younger brother in public rallies. "I am the second Lalu Yadav in Bihar," he declared at a rally in Jahanabad on Thursday, staking his claim on his father's political legacy.

Tejashwi Yadav, who has taken charge of the Rashtriya Janata Dal (RJD) on behalf of his jailed father Lalu Yadav, has increasingly been at the receiving end of his brother's attacks over the past few days. Last month, the two brothers had smiled and hugged for the cameras at Tej Pratap Yadav's birthday. That truce apparently didn't last long.

"He (Lalu Prasad) is a very energetic man. He used to attend 10-12 programmes in a day. Now, leaders fall sick in just two to four programmes," Tej Pratap said while campaigning for his candidate Chandra Prakash in Jahanabad, where the RJD has its own candidate.

He might as well have taken the name of his brother, who has cancelled many of his scheduled rallies over health constraints. "I am the blood of Lalu Yadav. He is our idol as well as our guru. I am the second Lalu Yadav in Bihar," said Tej Pratap, 30.

Again, without naming his brother, he said RJD tickets had been given to sycophants. He said he was confident that his candidate, not the RJD's official pick, would win the Jahanabad seat with a margin of more than one lakh.

Tejashwi, the sharper and politically weightier of the two Yadav sons, is widely seen as his father's successor and the won to inherit his legacy.

The brothers have been bickering since Tejashwi decided to field Chandrika Rai, Tej Pratap's estranged father-in-law, from the Saran constituency of Lalu Yadav. Tej Pratap, who filed for a divorce just months after his wedding, hit out at Tejashwi for not keeping the seat "within the family".

As Tejashwi Yadav refused to back down, Tej Pratap announced that he would field his own candidates under a new outfit named after their parents, the "Lalu Rabri Morcha".