"Rahul Gandhi has humiliated and disgraced Amethi... if the intention of a leader is good, it ensures speedy development of the area," Smriti Irani said. 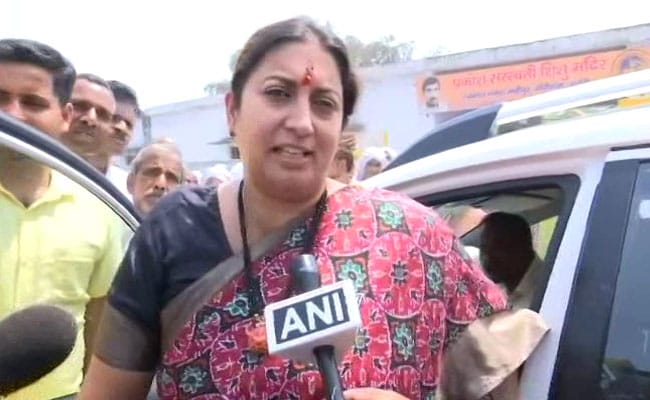 Union Minister Smriti Irani today accused Congress chief Rahul Gandhi of "disgracing" his Lok Sabha constituency and "crushing the dreams" of its people over the past 15 years .

Ms Irani, who is the BJP's candidate for the Amethi parliamentary constituency in Uttar Pradesh, is making a second attempt to wrest the seat from Rahul Gandhi.

In the 2014 polls, Mr Gandhi had defeated Ms Irani by a margin of one lakh votes. This time, besides his stronghold of Amethi in Uttar Pradesh, the Congress chief is fighting the Lok Sabha elections from Wayanad, in Kerala.

Addressing an election meeting , Ms Irani said, "Rahul Gandhi has humiliated and disgraced Amethi... if the intention of a leader is good, it ensures speedy development of the area."

Calling the Gandhi family "dynasts", she said, "The ''naamdar'' have been crushing the dreams of the people of Amethi for the last 15 years and still consider the people of the constituency as their slaves."

Rahul Gandhi was elected to the Lok Sabha from Amethi first in 2004 and has retained the seat since.

Terming the congress president a "missing MP", Ms Irani claimed the Congress chief does not have time to provide basic facilities to the people of the constituency or share their happiness and grief.

Trying to strike an emotional chord with the gathering, she said, "I am a mother of two kids... I take care of my parent and in-laws, work at a ministry and despite losing (the last election) I have been coming here continuously to serve you all and Amethi."

Claiming that 1.75 lakh people of Amethi have being linked with the BJP government's healthcare scheme Ayushman Bharat, Ms Irani said, "The government of ''naamdar'' people never thought about this."