Entrepreneurial garment manufacturers tapped into a groundswell of support for PM Modi when he successfully bid to become prime minister for the first time in 2014, winning by a landslide. 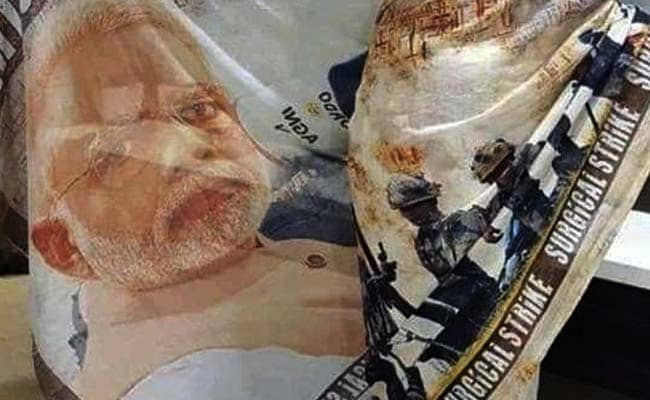 D. Gokal is buying a sari for his wife that may not be to everyone's taste -- a huge image of Prime Minister Narendra Modi's face is printed on it.

"It's a beautiful sari, enhanced by Prime Minister Modi. My wife likes it," Gokal tells AFP at the Paaneri clothing store in central Mumbai.

The shop is doing a roaring trade in Modi-themed saris as the country gears up for general elections due by May.

PM Modi, of the Bharatiya Janata Party (BJP), will be seeking a second term in office when the world's largest democracy heads to polls.

Rahul Gandhi of the main opposition Congress party will be up against him in the vote, the dates of which are expected to be announced this week.

Entrepreneurial garment manufacturers tapped into a groundswell of support for PM Modi when he successfully bid to become prime minister for the first time in 2014, winning by a landslide.

However, a year after being elected he was pilloried when he wore a pinstriped jacket that had his name embroidered in it dozens of times in gold thread during a meeting with then US President Barack Obama.

"In 2014 I wasn't sure if people would wear Modi saris but women were bold enough to try them," Vinod Gada, the owner of Paaneri, told AFP.

"We have sold over 2,200 this year and expect to see a surge in the run up to the election," he added.

The saris -- which are printed in factories in India's financial capital Mumbai and Surat in Gujarat state -- cost 1,750 rupees ($25).

As well as PM Modi's face they sport colourful floral patterns and images of tanks and fighter aircraft.

They also depict Indian soldiers in battle, including some parachuting to the ground.

For now, Gada has no plans to sell Congress-supporting saris but media reports have said that at least one factory owner has started to make them with the images of Rahul and his sister Priyanka Gandhi on them.