Lok Sabha Elections 2019: Sambit Patra's video shows him visiting a family in Puri, the constituency from where he has been fielded in the coming national elections. 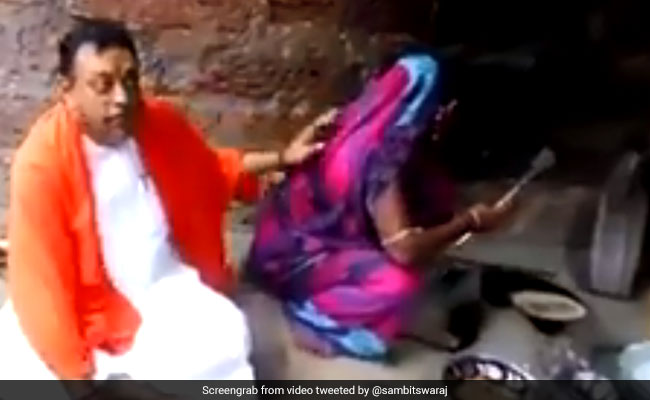 A video tweeted by the BJP's Sambit Patra on Sunday raised questions about the success of Ujjwala Yojana, the scheme to provide free cooking gas connections to rural women of the Below Poverty Line households. The government has cited the flagship scheme -- launched in 2016 -- as one of its key successes. The video shows Mr Patra visiting a family in Puri, the constituency from where he has been fielded in the coming national elections.

The BJP spokesperson is seen sharing a meal with the family, sitting cross-legged on the floor before a traditional banana leaf plate. But what caught the eyes of most was a glimpse of a woman sitting and cooking before an earthen, wood-burning stove.

His tweet in Oriya read: "This is my home, my mother fed me food cooked by her. I also fed her with my own hands. I know service to mankind is the biggest service to God".

Many on Twitter questioned the success of the scheme, which, the government said on International Women's Day, has reached 7 crore households.

On Independence Day, Prime Minister Narendra Modi said in view of speed at which connections are being disbursed, the programme's goal has been scaled up to eight crore connections by 2020.

But with LPG cylinders costing an average of Rs 800, there has been criticism that many BPL families are unable to afford a refill. Critics have questioned whether the government's figures really reflect a permanent switch to clean fuel.

The government website shows data on how many families have received a cooking gas connection, but there is no data on refills.