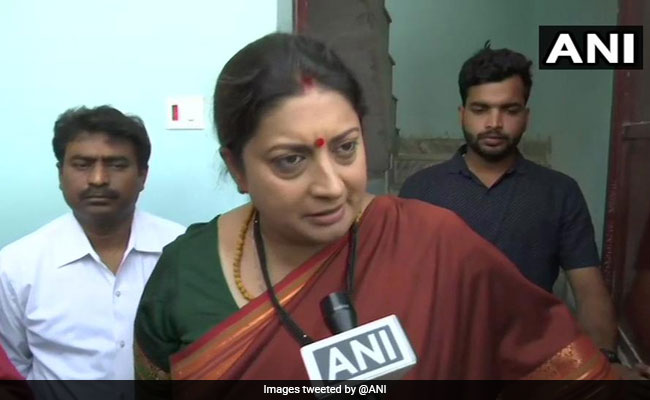 Elections 2019: Smriti Irani in UP's Amethi said Rahul Gandhi will have to "answer for such acts"

Union Minister Smriti Irani accused the Congress of booth capturing in Uttar Pradesh's Amethi as voting took place in the constituency where she is challenging Rahul Gandhi.

"I tweeted an alert to administration and Election Commission (alleging booth capturing in Amethi), hope they take action," Smriti Irani told the media here. "People of the country have to decide whether this kind of politics of Rahul Gandhi should be punished or not," she said.

The tweet was posted after a BJP worker tweeted a video of an elderly woman who claimed that she was forced to vote for the Congress even though she had planned to press the button against the BJP's "lotus" symbol on the voting machine.

"They forcibly took my hand and made me press panja (hand - Congress symbol)," the woman said in the video.

"They said that 'chowkidar chor hai', but they are the ones who are stealing votes. Rahul Gandhi will have to answer for such acts and the administration must look into the matter," said the Union Minister.

Congress President Rahul Gandhi is seeking re-election from Amethi, the constituency he has held since 2004. In the 2014 election, he won by a reduced margin of about one lakh over his challenger Smriti Irani of the BJP.