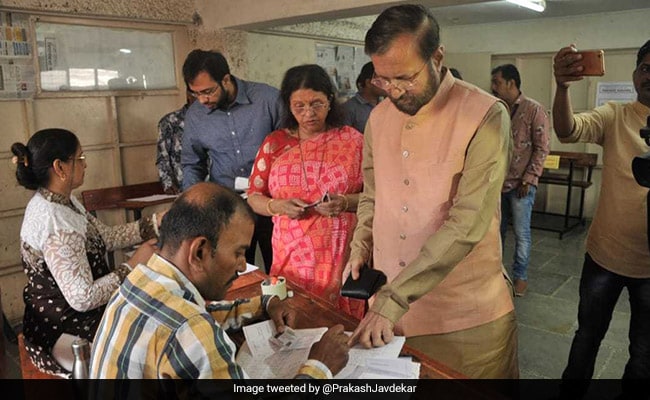 Mr Javadekar voted at a booth in Pune Lok Sabha seat, where the BJP has fielded Girish Bapat against Congress' Mohan Joshi, and later said he was hopeful that people will vote for a good leadership and the country''s development.

"Today when people will cast their vote, they will vote with a hope that India will remain secure and there will be a strong and untainted government. They will vote for good leadership and development," he said.

He said people are supporting Prime Minister Narendra Modi, and claimed that the BJP will get over 300 seats to facilitate NDA's return to power with two-third majority.

The People are voting for Decisive Leadership, Development, National Security and ensure that @BJP4India gets 300+ seats.
Casted my vote for the #LokSabhaElections2019 in Mayur Colony, Pune.@narendramodi@amitshah@bjp4india@bjp4rajasthan@bjp4maharashtrapic.twitter.com/dWBC2HTLRM

The minister also said that people will "punish" the Congress, alleging that it was "spreading lies".

Anna Hazare exercised his franchise at a polling booth at his native Ralegan Siddhi village in Ahmednagar district.

According to election officials, voting is going on smoothly and long queues were seen outside several polling booths in Pune and Baramati constituencies.