Polling Continued At Some Booths In Andhra Pradesh Till Midnight

Lok Sabha Elections 2019: The polling concluded around midnight in some polling stations in Guntur, Krishna, Nellore and Kurnool districts as authorities allowed all the voters standing in queues at 6 pm to cast their votes. 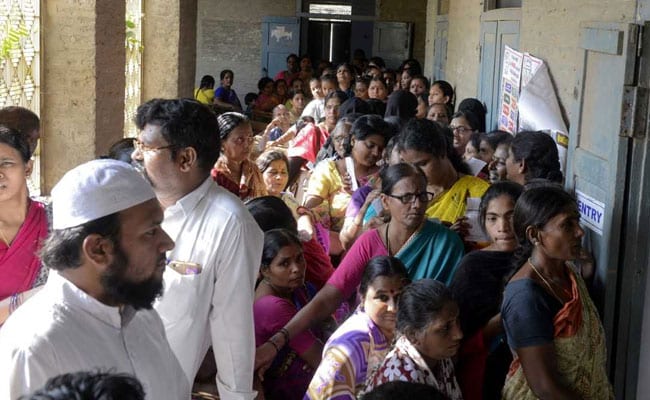 The polling process was delayed due to malfunctioning of EVMs and violence.

Making history of sorts, polling in some booths in Andhra Pradesh continued till midnight as the total voter turnout reached nearly 80 per cent, capping hours of tension and clashes that left two dead and scores of others injured.

The polling concluded around midnight in some polling stations in Guntur, Krishna, Nellore and Kurnool districts as authorities allowed all the voters standing in queues at 6 pm to cast their votes.

Malfunctioning of Electronic Voting Machines (EVMs) and clashes led to the delay in about 400 polling stations in different parts of the state.

Tension was also palpable at a booth in Vijayawada and in Kurnool district due to the clashes between rival groups.

As many as 25 incidents of violence marred polling for simultaneous elections to the 175-member Assembly and 25 Lok Sabha seats.

Chief Electoral Officer Gopal Krishna Dwivedi said 74 per cent polling was recorded till 6 pm. He said the overall percentage could go up to 80.

He said he received representations for re-poll in some booths from various parties. The Election Commission will take a decision in this regard after going through the available records, evidence and reports of the poll officials concerned.

Polling in three Maoist affected Assembly segments ended at 4 pm and in three others an hour later.

A worker from the TDP and another of the YSRCP were killed in violence in Anantapur and Chitoor districts.

More than a dozen others including senior TDP leader and Assembly Speaker Kodela Sivaprasad Rao were injured in clashes at various places.

Complaints of non-functioning of Electronic Voting Machines (EVMs) and resultant delay at the start of polling were received from across the state.

Chief Minister and TDP president N. Chandrababu Naidu expressed his unhappiness over EVMs not functioning at several polling booths. He wrote a letter to the Chief Election Commissioner, demanding a re-poll in 150 booths.

A little over 3.93 crore voters were eligible to vote to decide the fortunes of 319 candidates for Lok Sabha seats and 2,118 candidates for Assembly polls.

The TDP and YSRCP are locked in a direct fight for power while Jana Sena of actor Pawan Kalyan made its debut in alliance with the Bahujan Samaj Party (BSP) and the Left parties. The BJP and Congress also contested all seats on their own.

In 2014 elections, TDP had bagged 102 seats while its then ally BJP had won four seats. YSRCP had won 67 seats. Two independents were also elected.

In the simultaneous elections held for Lok Sabha, TDP had bagged 15 seats while BJP got two seats. YSRCP candidates were elected from eight constituencies.