Gopal Shetty, seeking re-election from Mumbai North, is confident of repeating his 2014 win. 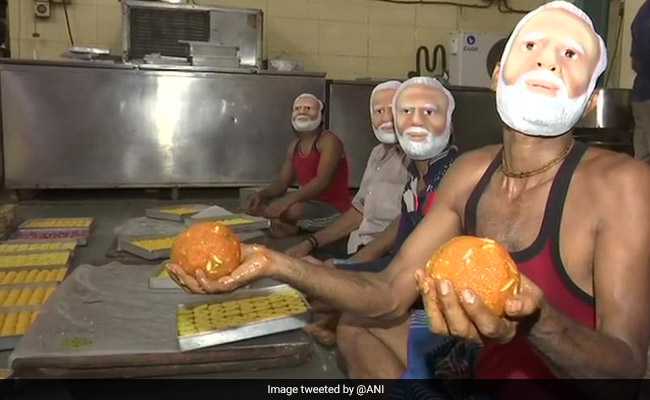 After the exit polls on Sunday predicted an easy win for the ruling BJP in the national elections, a party leader in Maharashtra is already in a mood to celebrate.

At a sweets manufacturing unit in Mumbai's Borivali, BJP candidate from North Mumbai parliamentary seat, Gopal Shetty, who is fighting against Congress candidate and actor-politician Urmila Matondkar from Mumbai North, has ordered about 2,000 kg of Laddoos. These sweets will be distributed on May 23, when the results of the seven-phased national elections will be declared.

Bharat bhai, the owner of Vivedham Sweets unit where these Laddoos are being prepared, says: "We have received orders from the Mumbai North BJP candidate Gopal Shetty for preparing 2,000 kg of laddoos. He says the order may go up. Our workers are Modi supporters so they are making sweets wearing the Modi masks."

He further adds: "After the exit polls, we haven't received orders from the Congress and they may not order if the results are what exit polls suggest."

Gopal Shetty, seeking re-election from Mumbai North,  is confident of repeating his 2014 win. But this time, Congress's Urmila Matondkar ran a strong campaign against him. The seat is considered to be a BJP stronghold.

Maharashtra, that has 48 seats, sends second highest number of lawmakers to the parliament after Uttar Pradesh. The BJP-Shiv Sena combine in the state is likely to put up a strong fight. Mumbai has six seats, from one of which Gopal Shetty is contesting.