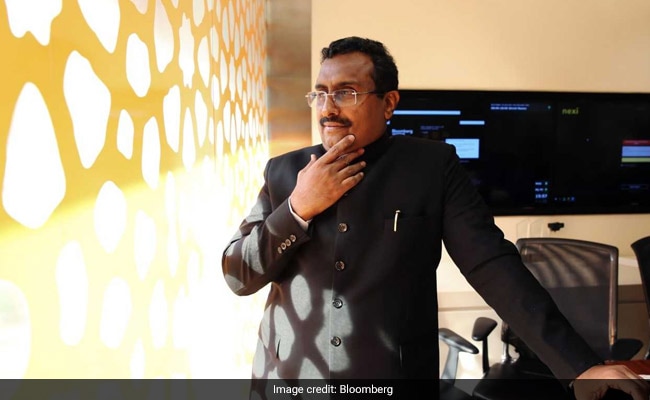 A senior leader of Prime Minister Narendra Modi's ruling BJP forecasts it may fall just short of a clean majority, the first time the prospect of a coalition has been raised as India heads into the final two weeks of its marathon election campaign.

The conservative forecast by Ram Madhav, the BJP's national general secretary, is just short of a clear majority in the 543-seat parliament, and is far below what other party leaders including finance minister Arun Jaitley and party president Amit Shah have publicly claimed.

"If we get 271 seats on our own, we will be very happy," Mr Madhav said in an interview with Bloomberg News Editor-in-Chief John Micklethwait in New Delhi on Saturday. "With NDA we will have a comfortable majority," he said referring to the National Democratic Alliance.

The party will make up expected losses in the north Indian states it swept in 2014 with new gains in the northeast, as well as in West Bengal and Odisha, Mr Madhav said. It will pursue pro-growth policies if it returns to power, he added, and has not shifted from a focus on economic reforms to one based on populist cash handouts.

"We have expanded in eastern India very well -- if similar effort had been put into south India also, probably we would have been more comfortable," Madhav said. "As politicians, we must remember that what we achieved last time, we may not repeat because of anti-incumbency."

The mood was more upbeat among the 50,000 people who packed into barren farmland covered in a huge tent near Bhadohi -- the carpet manufacturing capital of India -- at one of PM Modi's many election rallies. Before the Prime Minister spoke, the deputy chief minister of Uttar Pradesh, Keshav Prasad Maurya, warmed up the crowd.

"2014 was a Modi wave. 2019 is a Modi tsunami," Mr Maurya said. "Your vote on the lotus will mean dropping 1,000 kilogram bombs on terrorist camps," he said, referring to the party's symbol -- a lotus -- which is featured along with other party insignia on the buttons on electronic voting machine.

PM Modi arrived in an India Air Force helicopter and was greeted like a rock star.

"When India attacked terrorist camps did it make you proud? Is Modi right? Should we proceed on this path?" The crowed yelled "yes."

Still, for all PM Modi's harsh rhetoric on Pakistan, Mr Madhav -- who deals with some foreign policy issues for the party -- sounded hopeful about India's relations with its nuclear-armed neighbor following a standoff in February.

The recent United Nations Security Council designation of Masood Azhar -- the Pakistan-based head of a group that claimed the Pulwama  suicide bombing -- as a global terrorist offers the chance for Islamabad to prove it's cracking down on terrorist groups, he said.

Credible action could yield a productive meeting between PM Modi and Pakistan Prime Minister Imran Khan, who are due to attend the Shanghai Co-operation Organization summit shortly after the end of India's weeks-long election, which wraps up on May 23, Mr Madhav said.

"They should show their sincerity towards the fight against terror," Mr Madhav said. "Why I'm saying this is, three weeks after the results, we have the SCO. At the SCO, Prime Minister Imran Khan and Prime Minister Modi will be face to face. It's an opportunity for Pakistan. If something credible comes out in the next one month or so, before the SCO happens, I'm sure the relationship will have some improvement. But the onus is on them now."

Azhar's listing came after China dropped its objection at the UN. "My understanding is that China has finally calculated the gains and losses of taking a position on Masood Azhar this time around," Mr Madhav said.

Another significant development in India's foreign policy had been the strengthening relationship between PM Modi and China's President Xi Jinping. "They have developed a very good personal rapport," Mr Madhav said.

On China's vast and contentious Belt and Road infrastructure project, which India has refused to sign on to, Mr Madhav said until the question of sovereignty was resolved there could be no compromise. India has long objected to the program because it funds $60 billion worth of infrastructure in Pakistan, including in parts of Pakistan-occupied Kashmir.

"We still have a view that the whole project is conceived unilaterally," Mr Madhav said.