The BJP-led NDA won 39 of the 40 Lok Sabha seats in Bihar. Only one seat went to the Congress. 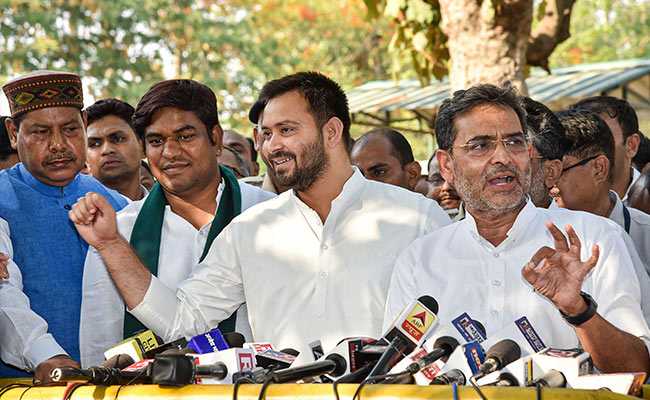 Tejashwi Yadav with RLSP chief Upendra Kushwaha after the meeting.

Dissonance within the opposition "mahagathbandhan" in Bihar, smarting under the drubbing in the general election, came to the fore on Wednesday as the Congress skipped a meeting of the alliance partners at the residence of former chief minister Rabri Devi, whose RJD leads the five-party grouping in the state.

The meeting took place shortly after over a dozen RJD lawmakers including Abdul Bari Siddiqui and Chandrika Roy, skipped the legislature party meeting, apparently unhappy over their poll defeat from Darbhanga and Saran respectively.

Sources in the alliance said the RJD legislators were dissatisfied with the leadership of Tejashwi Yadav, the younger son and political heir of party chief Lalu Prasad.

They also pointed towards the damage that might have been caused by the rebellion from Tejashwi Yadav's mercurial elder brother, Tej Pratap Yadav, who had floated a parallel outfit and supported rebel candidates before falling in line.

Notably, Tej Pratap, who was conspicuous by his absence at the party's meeting on Tuesday, stayed away from Wednesay's meeting as well, fuelling speculation about a feud in the family that controlled the Rashtriya Janata Dal (RJD).

Tej Pratap, however, had sent a letter through his emissary the previous day, extending full support to his younger brother and declaring that those having problems with Tejashwi's Yadav's leadership were free to leave the party.

Meanwhile, emerging from the meeting and flanked by allies Upendra Kushwaha, who heads the RLSP, Hindustani Awam Morcha (HAM) leader Santosh Kumar Suman and Mukesh Sahni, the founding president of the VIP, Tejashwi, talking to reporters, expressed surprise at the results of the general election in Bihar.

The BJP-led NDA won 39 of the 40 Lok Sabha seats in the state. Only Kishanganj went to the Congress.

"The poll results were beyond our imagination, because throughout the election, we had seen top NDA leaders such as Nitish Kumar, Sushil Kumar Modi and Ram Vilas Paswan attending rallies with sullen faces, visibly upset over the lack of crowds. In contrast, a groundswell of support for the mahagathbandhan was palpable everywhere," Tejashwi Yadav said.

Downplaying the absence of Congress leaders at the meeting, the RJD heir apparent said he was in regular touch with the party's national leaders such as Rahul Gandhi, Priyanka Gandhi and Ahmed Patel.

"I will be attending a meeting of the mahagathbandhan scheduled in a few days," he added.

The young RJD leader was apparently at a loss to explain his party''s worst-ever electoral performance, wherein it failed to win a single seat.

"We feel that the NDA conspired to set a narrative that diverted public attention from the real issues that the mahagathbandhan had raised," he said.

Meanwhile, a senior Congress leader said on the condition of anonymity that the party must have received an invitation for the Grand Alliance meeting. "The problem is, we have a lot to blame ourselves for," he added.

"We agreed to contest only nine seats, despite having prepared for at least 15. Moreover, our choice of candidates was abominable. The wife of a dreaded don like Anant Singh was fielded from Munger. She lost but not without leaving us labelled as a party that patronised criminals," he said.