The Election Commission has ordered re-polling on May 19, and initiated action against the main accused as well as three officials in connection with the poll violation.

Shobha, a resident of Asaoti village, said she rebuffed the accused's attempts to make her vote BJP.

A BJP agent accused of trying to push three women into voting for the "lotus symbol" at a polling booth in Faridabad's Asaoti village was released on bail hours after his arrest on Sunday evening. The man, Giriraj Singh, has denied all charges - claiming that he was only trying to help "illiterate" women from the village cast their votes.

The Election Commission later found the complaint to be true, and ordered re-polling at the booth on May 19. It also initiated action against several officials in connection with the incident, and ordered the filing of a first information report against Giriraj Singh. "The presiding office, Shri Amit Atri, has been placed under suspension for dereliction of duty. Criminal action is also being initiated against him," it said in a press release.

Besides this, the election body barred micro-observer Sonal Gulati from election duty for three years on charges of reporting the incident incorrectly, and transferred the returning officer concerned with immediate effect.

When NDTV zeroed in on one of the women involved in the incident, she confirmed that Giriraj Singh had instructed her to punch the button next to the BJP's electoral symbol. "He told me to vote for the lotus. But I told him that it was my choice, and I will vote for any party I want. I left soon afterwards," said Shobha, a resident of the village.

The woman said she did not complain to anybody at the polling booth because she had to hurry home to her ailing daughter.

The matter came to light on Sunday, when a video of the incident that occurred at polling booth number 88 in Asaoti village cropped up on Twitter. It shows Giriraj Singh, in a blue t-shirt, approaching the voting compartment even as a woman was prepares to cast her vote. He appears to gesture at the voting machine before returning to his seat. Giriraj Singh later repeats the act with two other women, undeterred by the presence of election officials in the booth. 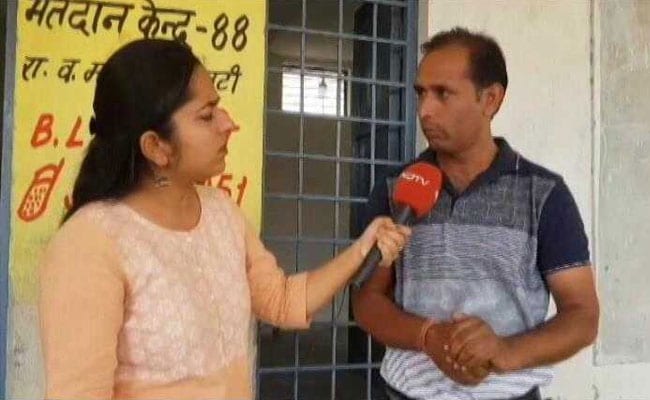 Giriraj Singh said he was only trying to help the women cast their votes.

However, Giriraj Singh said he wasn't even aware that going near the voting machine was a poll violation. "I was only trying to help," he told NDTV. "There are two voting machines and 28 candidates in the (Faridabad Lok Sabha) constituency, and the women of this village are illiterate. Even educated people get confused when it comes to using these machines. I was only showing them how to do it."

The Faridabad Lok Sabha constituency voted in the sixth phase of the Lok Sabha elections on Sunday. IAS officer Ashok Kumar Garg has been posted as the new returning officer of the constituency, and instructed to join by forenoon today.