The Tripura Congress president appealed to former Congress leaders and workers who have left the party to return to the Congress. 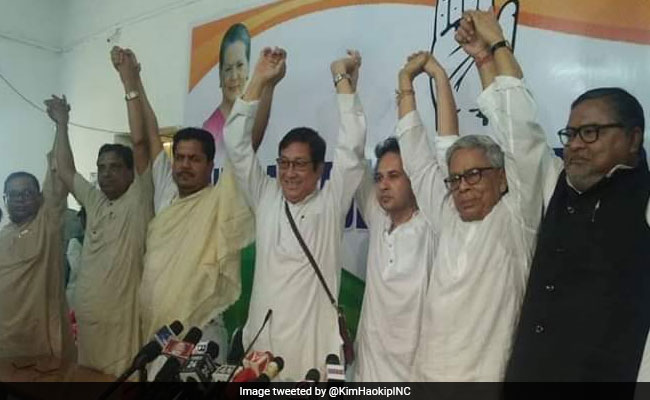 All three BJP leaders, who joined Congress today, were previously with the Congress

The ruling BJP in Tripura received a jolt as three of its leaders including state unit vice-president Subal Bhowmick joined the Congress on Tuesday.

Congress Tripura unit president Pradyot Kishore Debburman welcomed Bhowmick, senior leader Prakash Das and vice-president of the BJP kishan morcha Premtosh Debnath to the party and said "today is a historic day. Their joining our party is like returning of family members to their own home."

Mr Bhowmick, Mr Das and Mr Debnath were earlier with the Congress.

Mr Debburman claimed that many leaders who have left the party would return to the Congress at the rally to be addressed by Congress president Rahul Gandhi on Wednesday.

The Tripura Congress president appealed to former Congress leaders and workers who have left the party to return to the Congress.

Mr Bhowmik had joined the BJP in 2014 and was appointed the vice president of the party's state committee.

Mr Bhowmick said he along with many other Congress leaders and workers had joined BJP to change the 25 years rule of CPI-M and restore democracy in the state.

"However, after BJP came to power we could understand that there was no virtual change in the government and there was no democracy in the party. The government is corrupt and
inefficient and failed to deliver any good to people. I am sure BJP would be ousted in the Centre and Congress under leadership of Rahul Gandhi would secure absolute majority, he said.

When contacted, BJP spokesperson, Ashoke Sinha said, "Everybody is free to join any party. I can only say that their joining other party would not harm the poll prospect of the BJP in the state."

Election to the two Lok Sabha seats in Tripura would be held on April 11 and 18.