Tej Pratap has fielded his own candidates in Sheohar and Jehanabad against his party, the RJD. 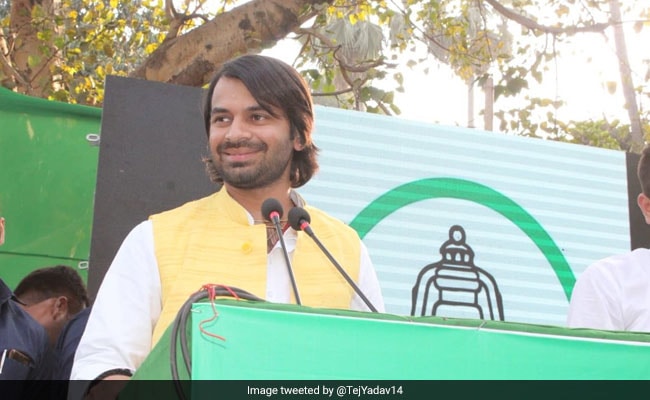 Tej Pratap, the elder son of Rashtriya Janata Dal (RJD) chief Lalu Yadav, is campaigning against his party, urging people not to vote for his father-in-law Chandrika Rai, an RJD candidate from Bihar's Saran candidate. The legislator, who filed for divorce last year, is also canvassing for Chandra Prakash Yadav, a candidate he has fielded from Jehanabad against his own party.

Tej Pratap had sought tickets for his loyalists in Sheohar and Jehanabad, threatening to field his candidates under the banner of "Lalu-Rabri Morcha", a faction named after his parents. Tejashwi Yadav, who has taken over the party after father Lalu Yadav had been jailed in corruption cases, had put his foot down and fielded his own candidates.

The mercurial leader had also threatened to contest the election against Mr Rai, but took a U-turn later.

He had said he might not campaign against Mr Rai. He, however, is appealing to people with folded hands to ensure his defeat from the Saran seat, news agency IANS reported.

Tej Pratap also took pot-shots at his brother Tejashwi Yadav, who is considered to be the heir apparent to Lalu Yadav. He said that Tejashwi was not taking his advice and was surrounded by sycophants, reported the agency.

He had filed for a divorce in November last year, barely six months after marrying Aishwarya Rai, Mr Rai's daughter. As the family attempted a patch-up, Tej Pratap moved out of their home and went on a month-long trip visiting holy places.

Today, he refuted Mr Rai's statement that he would bring back his estranged wife to his home. "My divorce petition is in the court...I will seek divorce. There is no change in my stand," he said.

Tej Pratap also staked claim on his father's legacy. "I am the second Lalu Yadav in Bihar," he declared.

"He (Lalu Prasad) is a very energetic man. He used to attend 10-12 programmes in a day. Now, leaders fall sick in just two to four programmes," Tej Pratap said.

There have been reports of a rift between Tej Pratap and Tejashwi ever since the younger brother was picked by his father to run the party in his absence. Tej Pratap had said that there were elements within the party that were driving wedge between them.