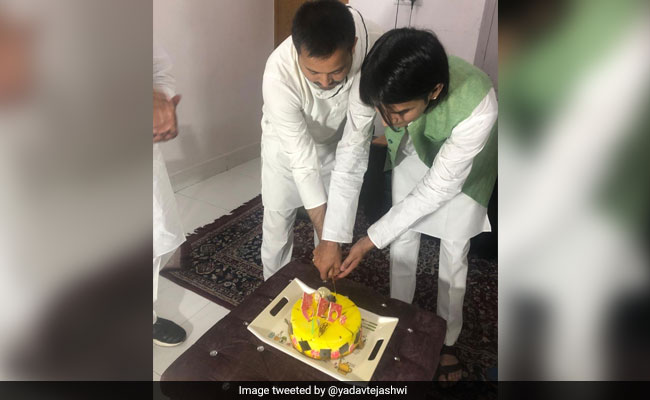 Bihar politician Lalu Yadav's sons have done it again. Fight, make-up, rinse, repeat. As usual, they announced their reconciliation with a photo-op; it was older brother Tej Pratap Yadav's birthday and younger brother Tejashwi went to wish him.

"There was never any dispute," said Tejashwi, who has been running the Rashtriya Janata Dal (RJD) on behalf of his father Lalu, who was jailed in 2017 for corruption. "Today is his birthday and I have come to wish him. We have to be united and take up Lalu-ji's fight against communal forces," he added.

Tej Pratap Yadav, 30, always in the shadow of his younger, more politically gifted brother, had revolted last month over RJD candidates for the national election. He was especially upset because his estranged father-in-law Chandrika Rai was named as the candidate from Saran in Bihar, a seat where Lalu Yadav has won four times. Tej Pratap, who has filed for divorce from his wife of less than a year, had demanded that his father's seat be assigned to someone within the family.

Tej Pratap Yadav also wanted his aides to be fielded by the RJD in Jehanabad and Sheohar.

He walked out in a huff, putting out a cryptic tweet: "Naive are those who think I am naive."  Then he announced a new outfit named after his parents, the "Lalu-Rabri Morcha", and threatened to field separate candidates.

At Tej Pratap's birthday party, the theme was bright yellow. After cutting a yellow cake, with yellow and white balloons in the backdrop, the two brothers reunited and smiled for the cameras.

Did Tejashwi consider brother Tej Pratap the party's guardian after Lalu, poked a reporter. "Will you listen to your boss or older brother," Tejashwi lobbed right back. "He is my guardian, my guide, I do need his blessing."

Tej Pratap didn't say much, except: "The strong message from here is Krishna and Arjun are reunited."