Bhojpuri Actor-Singer Is BJP Candidate Against Akhilesh Yadav In Azamgarh

In 2016, Dinesh Lal Yadav was given the Yash Bharti award by the Akhilesh Yadav government in Uttar Pradesh. 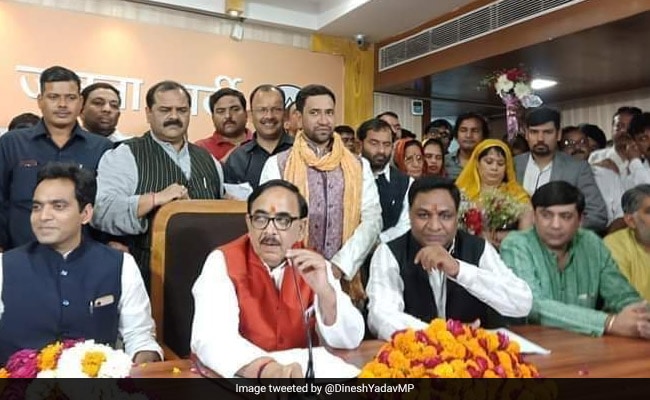 Before Nirahua joined the BJP, there was speculation that he would join the Samajwadi Party (File)

A famous name in the Bhojpuri film industry, Mr Yadav was a contestant on Bigg Boss 6 in 2012. He has starred in blockbuster movies like-- "Patna Se Pakistan", "Nirahua Chalal London","Nirahua Rickshaw Wallah" and "Nirahua Hindustani".

Before Nirahua joined the BJP, there was speculation that he would join the Samajwadi Party. But the actor told NDTV he did not agree with Akhilesh Yadav forging an alliance with Bahujan Samaj Party chief Mayawati.

"This is the voice of my soul, that I think Narendra Modi should become the Prime Minister again. I never wanted to come into politics but I have decided to contribute to PM Modi's re-election and that's why I have decided to join politics," he had told NDTV.

In 2016, the actor was given the Yash Bharti award by the Akhilesh Yadav government in Uttar Pradesh.

The Azamgarh seat was won by Mulayam Singh Yadav in 2014. This time, however, the former Samajwadi Party chief has shifted back to the family bastion of Mainpuri, making way for his son.

Azamgarh has a significant Muslim-Yadav population and has been won by either the Samajwadi Party or the Bahujan Samaj Party since 1996, except in 2009 when local strongman and ex-parliamentarian  Ramakant Yadav had won.