Mohammed Mohsin, the officer, "had not acted in conformity" with instructions on Special Protection Group (SPG) protectees, said the election body's order.

The Election Commission has sought a report on the incident (File)

The Election Commission has reacted to the controversy triggered by its decision to suspend an IAS officer for checking Prime Minister Narendra Modi's helicopter in Odisha's Sambalpur on Tuesday, saying its instructions were not followed. In a press conference, deputy election commissioner Umesh Sinha informed that a senior officer has been sent to the place and a report in this regard will be filed by Friday.

"ECI's instructions were not followed and in that context the orders were issued by the commission. The commission also appointed one senior officer to visit the place, who has gone there, who will have view of the observer as well as the officers and he will come back tomorrow and send a report," Mr Sinha said on Thursday.

Mohammed Mohsin, the officer, "had not acted in conformity" with instructions on Special Protection Group (SPG) protectees, the election body's suspension order had said.

Mohammed Mohsin, a 1996 batch Karnataka cadre IAS (Indian Administrative Service) officer, had been accused of "insubordination and dereliction of duty". Reports say as a general observer of Sambalpur constituency, the officer had carried out a sudden check of PM Modi's helicopter, which delayed the Prime Minister by 15 minutes.

Asked to specify the rule that had been violated, an Election Commission spokesperson had said: "As cited in the order...instruction dated 10.4.14 states that SPG protectees are excluded from checking."

NDTV has accessed the instructions cited in the suspension order but no such exception is listed.

The instructions read: "There shall be a total and absolute ban on the use of official vehicles for campaigning, electioneering or election-related travel." 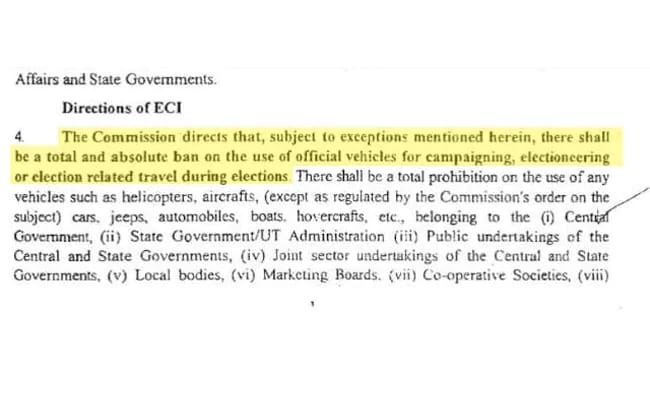 This is the Election Commission's 2014 direction calling for "total and absolute ban on the use of official vehicles for campaigning, electioneering or election-related travel".

On SPG protectees, it says: "The only exception from the above said prohibition will be Prime Minister and other political personalities, who might, in view of extremist and terrorist activities and threat to their lives, require security of a high order and whose security requirements are governed by any statutory provisions made by the Parliament or the State Legislature in this behalf."

But the Election Commission adds a caveat that "...if it has any reason to doubt that the assessment of security requirements made by authorities under the SPG Act or any other special instruction ...have been manifestly or unduly excessive with the intention of promoting indirectly the electoral interests of a particular party or candidate, the commission will bring the matter to the notice of the concerned Government for immediate and appropriate corrective steps."

NDTV also accessed the poll panel's instruction dated 14 July 1999 on the "use of Government Aircrafts/Helicopters"; that too does not does not exclude anyone from searches. 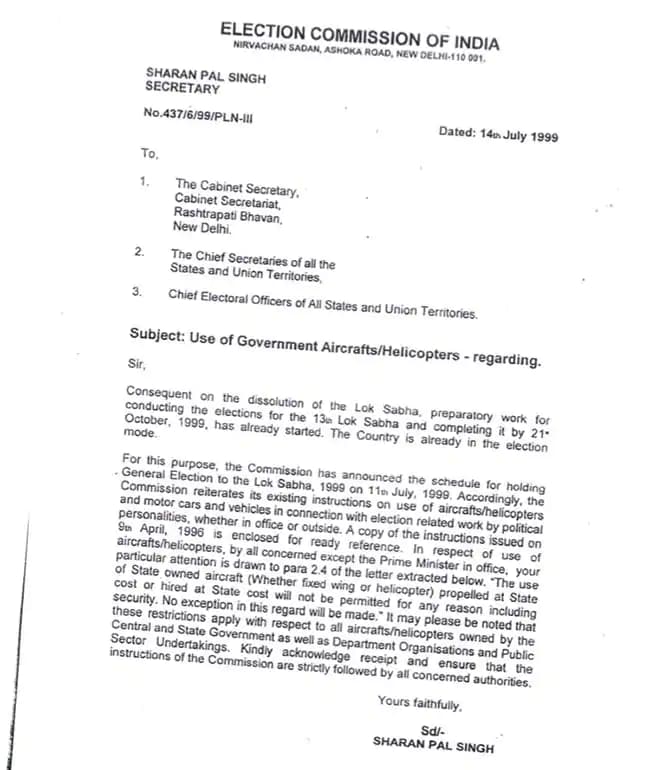 The instruction by the Election Commission in 1999 does not does not provide any exclusion from searches.

The official's suspension has provoked outraged tweets from the Congress and the Aam Aadmi Party (AAP).

The Congress wondered in its post, "What is Modi carrying in the helicopter that he doesn't want India to see?" The party said the Election Commission's rules do not exempt the PM's vehicle from being searched.

AAP tweeted: "The #chowkidar lives in his own protected shell! Is the Chowkidar trying to hide something?"