In Muzaffarnagar parliamentary constituency, around five lakh of the total 16 lakh voters are Muslim. The seat is seeing a clash of two heavyweights - Ajit Singh and the BJP's Sanjeev Balyan. 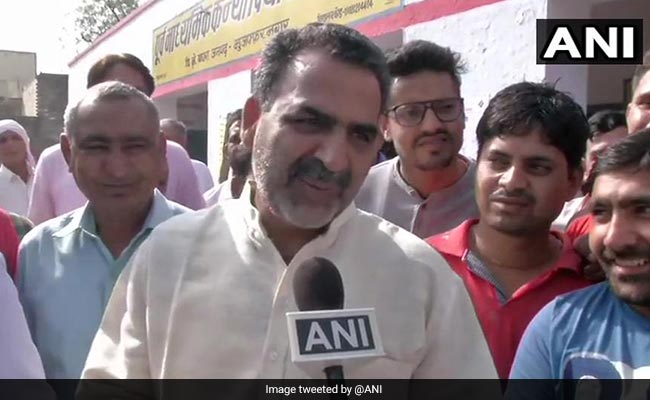 A little over an hour into voting in 91 constituencies in the first phase of the national election, the BJP lawmaker from western Uttar Pradesh's Muzaffarnagar, Sanjeev Balyan, has alleged "fake" voting in his town.

"Faces of women in burqa are not being checked and I allege that fake voting is being done. If not looked into, I will demand a re-poll," Mr Balyan told reporters outside a polling booth after casting his vote.

"There were no women constables. If there is such a long queue of women voters and there is no woman official in the polling party, then male officials should check," the BJP leader said.

"Already there is a mechanism in place that district magistrates have deployed women officials to ascertain the identity of female voters. Wherever there are burqa-clad women voters, women poll officials are posted to ascertain their identity," Uttar Pradesh Chief Electoral Officer L Venkateshwarlu told news agency PTI.

The Congress slammed Sanjeev Balyan for his remarks.

There were reports of glitches in electronic voting machines (EVMs) and some delay in polling in several northeastern states and Andhra Pradesh,.

In Muzaffarnagar parliamentary constituency, around five lakh of the total 16 lakh voters are Muslim. There are 11 lakh are Hindu voters, including Jats, Jatavs, Other Backward Classes (OBCs) and Scheduled Castes.

The communally-sensitive seat of Muzaffarnagar is seeing a clash of heavyweights - Rashtriya Lok Dal chief Ajit Singh who has allied with Mayawati and Akhilesh Yadav, and Sanjeev Balyan who is the sitting lawmaker.

The Congress has not fielded any candidate in Muzaffarnagar; it is one of the seven seats the Congress has left for the alliance that flashed it a "no entry" sign.

Months before the general election in 2014, Muzaffarnagar witnessed one of the most violent riots in Uttar Pradesh's history in 2013. Sixty people were killed and about 50,000 were displaced in the September 2013 violence.

In the 2014 national election, held about six months after the riots, Mr Balyan defeated Bahujan Samaj Party's Kadir Rana by a margin of more than four lakh votes.

Eight seats in western Uttar Pradesh are voting today. Of the 80 seats in Uttar Pradesh, the Samajwadi Party is contesting 37 seats, Mayawati's party from 38 seats, and Ajit Singh's party from three seats. The state will see polling in seven phases in the Lok Sabha elections.