Narendra Modi Birthday: The Lok Janshakti Party's workers poured milk at his poster which read, "We want PoK as return gift" indicating the Prime Minister should advance his actions towards the integration of Pakistan-Occupied-Kashmir with India. 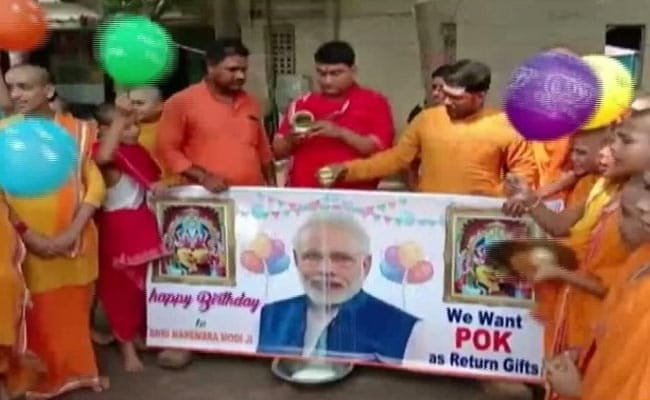 The workers poured milk at his poster which read, "We want PoK as return gift" indicating the Prime Minister should advance his actions towards the integration of Pakistan-Occupied-Kashmir with India.

The poster was held in hand by several workers and children, who were wearing saffron clothes. Amid reciting of mantras and blowing of a conch, a priest poured the milk over PM Modi's photo, reported news agency ANI.

Several events are taking place across the country to celebrate the Prime Minister's birthday praying for his long and healthy life. Wishes also poured in for PM Narendra Modi's birthday on micro-blogging site Twitter where #happyBirthdayPMModi was a worldwide trend.

For PM Narendra Modi's birthday, the BJP is observing Seva Saptah or Service Week that started on September 14. During this week, blood donation camps, health check-up, eye check-up, and operation camps are being organised across the country. Emphasis is also being laid to spread awareness to ban single-use plastics and participate in the cleanliness drives.

Earlier today, PM Modi visited the Statue of Unity and Sardar Sarovar Dam in home state Gujarat.  Along with Chief Minister Vijay Rupani, he opened the "Namami Narmade Mahotsav" and offered prayers at the dam site. He also reviewed several projects like visited river rafting, jungle safari park, butterfly park and the Ekta Nursery and also visited Khalvani eco-tourism site and Dutt temple. He then met his mother Heeraben who lives near Gandhinagar and took her blessings.