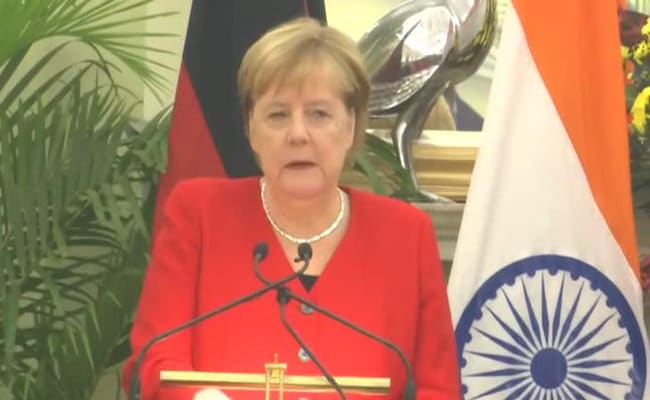 German Chancellor Angela Merkel arrived in New Delhi on Thursday. During her stay, she will discuss a host of bilateral issues with Prime Minister Narendra Modi and meet with President Ram Nath Kovind. PM Modi and Angela Merkel are also likely to sign over a dozen agreements including on agriculture and social security. She was received at the airport by MoS Prime Minister's Office Jitendra Singh.

Ms Merkel will meet with the Indian leadership, besides a business delegation during her visit. She will also co-chair the 5th Inter Governmental Consultation with PM Modi following which the two leaders will make press statements. On Saturday, the German leader will meet a business delegation and visit Continental Automotive Components India Pvt Ltd in Manesar, Gurgaon.

"All issues, even Kashmir, could be discussed. Germany supports India that Article 370 is an internal matter but has expressed concern along with the European Union, about restrictions and detentions in Kashmir which they say should be lifted immediately," sources said about possible discussion over Jammu and Kashmir and the scrapping of provision in Article 370.

Ms Merkel will be accorded a ceremonial reception at the Rashtrapati Bhavan on Friday morning and will pay tributes to Mahatma Gandhi at Rajghat later in the day.

Nov 01, 2019 13:48 (IST)
PM Modi speaks about increased cooperation to fight terror, extremism
India and Germany's trust and friendly relationship is based on shared values like Democracy, Rule of law. Therefore, there is a commonality in our approach to the serious challenges of the world. We will continue to discuss these topics in detail in the evening. We will intensify bilateral and multilateral cooperation to deal with threats of terrorism and extremism: PM Modi
Nov 01, 2019 13:46 (IST)
Prime Minister Narendra Modi speaks about Germany's support of India in international system
We are grateful to Germany for the strong support of India's membership in the Export control regimes and various international forums. The two countries will continue their cooperation and efforts to expedite other necessary reforms in the Security Council, United Nations and the international system: PM Modi
Nov 01, 2019 13:37 (IST)
PM modi speaks about technological partnership with Germany
India has made big plans ahead of its 75th year of independence in 2022. For achieving these targets in a short period, we have decided to partner with a technologically advanced nation like Germany. We look to partner with Germany in areas such as artificial intelligence, defence, cyber-security, etc. I also invite Germany to participate in the defence events planned in Tamil Nadu and Uttar Pradesh: PM Modi
Nov 01, 2019 13:34 (IST)
Signing of India-Germany declaration of intent
India, Germany sign five joint declarations of intent after talks between PM Modi and German Chancellor Angela Merkel. 11 pacts inked between India and Germany in fields such as space, civil aviation, maritime technology, medicine and education. reported news agency PTI.
Nov 01, 2019 13:34 (IST)
She is not just my counterpart and friend, but is also a long-serving global leader. The agreements signed today are a testament to the friendship and close ties that India and Germany share: PM Modi
Nov 01, 2019 13:33 (IST)
Prime Minister Narendra Modi addressing the media
We conducted the 5th IGC today. This is the third time I am attending this meet with Chancellor Merkel: PM Modi
Nov 01, 2019 12:20 (IST)
German Chancellor Angela Merkel in India
Angela Merkel, who is in India along with her 15-member delegation, attended the 5th Inter Governmental Consultations at Hyderabad House in Delhi.

Nov 01, 2019 11:16 (IST)
German Chancellor Angela Merkel in India
On Saturday, the German chancellor will also visit Dwarka metro station in Delhi before returning to Germany.
Nov 01, 2019 11:09 (IST)
German Chancellor Angela Merkel thanks PM Modi after the welcome ceremony
"I would like to thank the Prime Minister for the very warm and gracious welcome with which we have been received here. This is my fourth visit to India and I look forward to the very interesting programme," Ms Merkel said in German, with PM Modi by her side, reported news agency PTI.
Nov 01, 2019 09:41 (IST)
German Chancellor Angela Merkel visits Rajghat
Angela Merkel pays floral tribute to Mahatma Gandhi at Rajghat. News agency ANI also reported diplomatic sources, saying that main topics on agenda of talks between India and Germany will include skill development, climate, artificial intelligence, sustainable development, security & economy. Talks on possible free trade agreement with EU will also discussed. 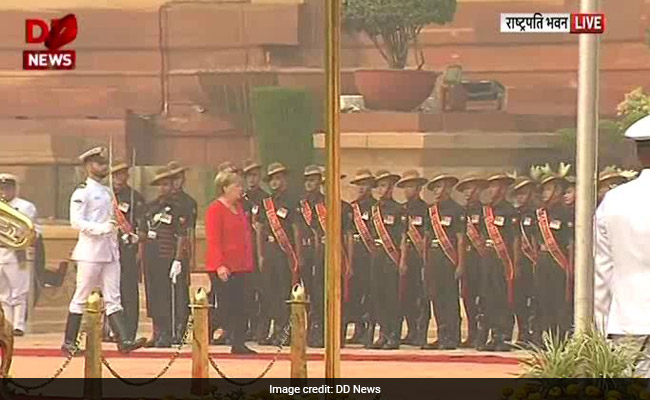